Two-time Democratic House of Delegates nominee Elizabeth Miller knows of what she speaks. In 2013, she lost to Virginia Del. Tag Greason (R) by just 651 votes (11,735-11,084), and in 2015 she lost to Greason again by 1,138 votes (9,734-8,596). As for Virginia State Senator Dick Black (far-right “R”), this extremist bigot was just reelected last year by less than 5 percentage points (25,898-23,544). Keep in mind that Black’s district was almost a dead heat between Mitt Romney and Barack Obama in 2012 (Romney won it 51%-48%), and that Black is one of the most extreme (not to mention disgraceful) members of the Virginia General Assembly, or any state legislature in America I’d guess. So yeah, if more Democrats had turned out to vote, perhaps Black would not longer be around to embarrass Virginia. And perhaps Democrats would control the Virginia State Senate. And perhaps we would still have Judge Jane Roush on the Virginia Supreme Court. And perhaps we could have figured out a way to get Medicaid expansion in this state. Etc, etc. Instead, too many Democrats find it easy to get all worked up about Bernie vs. Hillary (or Dean vs. Clark or Obama vs. Clinton or whatever), but can’t be bothered to show up when the state’s House and Senate (or local school boards, county boards, etc.) are up for grabs. It clearly frustrates Elizabeth Miller, just as it frustrates me, and just as it should frustrate every Virginian who doesn’t like lunacy and extremism, Dick Black style. 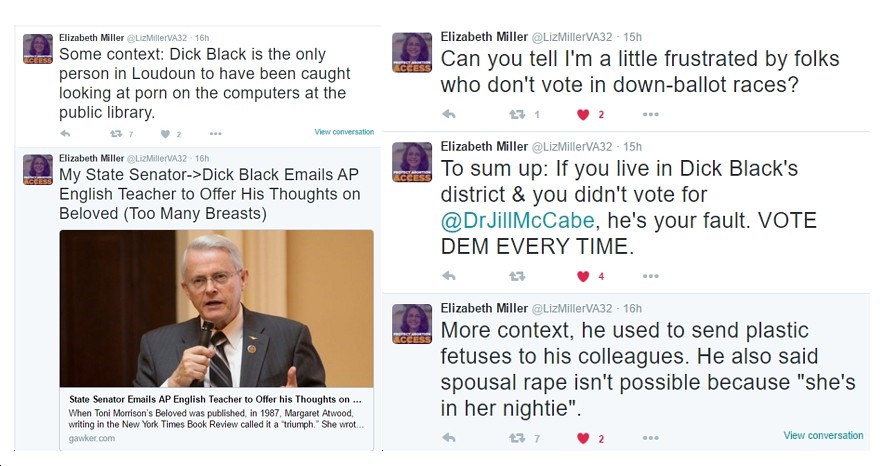 P.S. For a sampling of Dick Black lunacy, see: What Is It With Loudoun Republicans?!? Dick Black on Spousal Rape, “Nighties,” etc., The Truth About Dick Black (e.g., called birth control pills “baby pesticides,” passed out “pink plastic fetus dolls to state lawmakers in 2003 in a creepy campaign to win votes for various anti-abortion measures,” called “An Embarrassment to us all” by John Feegel, a former Chief of Staff to the Republican Leader in the Virginia House of Delegates); Republican Loudoun-sanity Continues: Dick Black Rails Against Gays in the Military (“there was a young fellow who went to the showers at night, there were two homosexuals lurking — they were also basic trainees – and they strangled him with a towel and forced him to submit to, you know, things that we won’t talk about”); Sen. Dick Black (R-Homophobia): Polygamy “just more natural” than homosexuality; VA Sen. Dick Black (R) Praises “Extraordinary Gallantry” of Syrian Armed Forces, GOP Candidate Who Made Marital Rape Remarks Drops Out of Congressional Race, etc, etc.