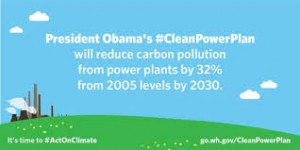 Here at Blue Virginia, we never hesitate to blast Dominion, or the politicians they keep in their air-conditioned kennels, for all these folks do to hold back our clean energy future.

But I believe in acknowledging when they do something right too.  So here I will give some (qualified) kudos to Dominion for the company’s filing of an amicus brief in favor of EPA’s Clean Power Plan this past week.

While it falls short of a ringing endorsement of the rule, Dominion does deserve credit for choosing not to take the path of so many of its fellow electric utilities – and more than half of America’s most backward states – of fierce opposition and legal challenge.  In supporting the Clean Power Plan, the company puts its massive thumb on the scale in favor of the right of future generations to a stable climate, and all the health, safety and peace that comes with it.

To be sure, every time in its filing that Dominion calls the regulation “challenging but feasible” and the timeline “reasonable”, it caveats these statements with the need for EPA and the states to maintain “flexibility” and a menu of options for implementation.  In this brief, Dominion takes a stand in favor of the market-based approach that George H.W. Bush’s very successful EPA Administrator Bill Reilly brought to the environmental field.

Yes, it was Republicans who created the market-based concept of “cap and trade”, the very same regulatory approach mercilessly vilified by the Tea Party loons who killed the Waxman Markey climate change bill of 2009 – thereby leaving America without a policy to deal with the most serious long term public health, environmental, infrastructural and economic challenge of our time.  It was that legislative failure that led the Obama administration to decide instead to take the regulatory route of the Clean Power Plan, which indeed does allow much flexibility and market-based options for states to take in meeting these carbon emissions standards.

Dominion makes a case for returning to the days of bipartisan support for common sense solutions: “Real-world experience, academic theory, and industry consensus all indicate that market-based measures are an optimal approach for states to adopt in air quality regulatory plans” – potentially including carbon dioxide cap and trade policies.

Sad to say, Dominion says little about renewables in its brief, and never even mentions that naughty word “efficiency.”  The company makes it clear that a large part of its plans to reduce its carbon footprint will continue to involve substituting natural gas for coal.  While this strategy has led Virginia to significant emissions reductions, it does not allow us to gain the multiple benefits that accrue from investing in the multitude of truly clean power options, from wind to solar to efficiency, that will free us from the pollution, climate disruption and geopolitical complications of our addiction to fossil fuels.

Yet, for all of its conservatism, Dominion’s stance on this matter is to the left of much of the Republican party and even, interestingly, of its own regulators, Virginia’s State Corporation Commission, which released an attack on the Clean Power Plan over a year ago – a wrong-headed piece that was pretty easy to rip to shreds.

To be sure, Dominion does what is best for Dominion’s bottom line – they have not suddenly graduated to environmental sainthood.  But the fact that the company has come down on the right side of such a critical issue provides a glimmer of hope that perhaps their management may one day become an actual ally in our battle to create a Clean Energy Commonwealth.  Hey, a guy can hope…