Note that the Logan Act “forbids unauthorized citizens from negotiating with foreign governments having a dispute with the U.S. It was intended to prevent the undermining of the government’s position,” and that violation of this act is a felony. Also note that regardless of the Logan Act, blaming the U.S. for the civil war in Syria – when it clearly was caused by the Assad regime’s brutal response to pro-democracy demonstrations during the “Arab Spring” – and is being perpetuated by Hezbollah, ISIS, Russia, etc. – is not just absurd but appalling. Note in particular Black’s comment that the war “would come to an end if the US stops training terrorists in Jordan, Saudi Arabia and other countries in the region and stops providing them with military support.”

Note also Black’s praise for Syrian President Bashar Assad (“An outspoken Republican state senator from Virginia has traveled to Syria and promised support for the government of President Bashar Assad”), a vicious war criminal, and even declaring, “I will be Syria’s voice.” Of course, Black has a long history of extreme and insane behavior, but this really takes the cake. On the other hand, Black fits right in as Virginia campaign co-chair for bat****-crazy extremist Ted Cruz. What a party, huh? 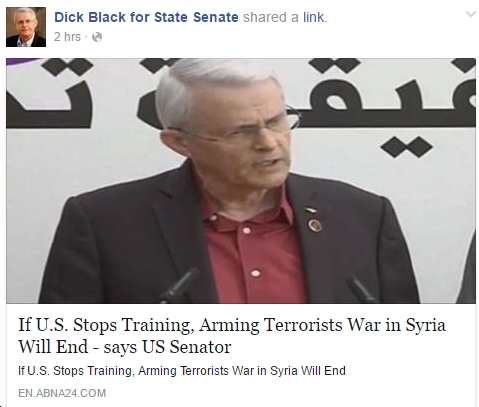 It's not even 7 months into his term, and Youngkin's already bored with being governor of Virginia - and MUCH more focused on the 2024 presidential race... https://bluevirginia.us/2022/07/tuesday-news-the-ba-5-covid-surge-is-here-horror-in-highland-park-the-sixth-us-mass-shooting-in-seven-weeks-jewish-community-leaders-will-fight-attempts-to-restrict-abortion-in-virginia#comment-5907781482 h/t @CarterElliottIV

Good point by @BillKristol. It's interesting, by the way, that only 8% of Americans want to make our gun laws LESS strict, yet the Republican Party is mostly in sync with that 8%, certainly not with the 66% who want to make gun laws more strict! https://bluevirginia.us/2022/07/tuesday-news-the-ba-5-covid-surge-is-here-horror-in-highland-park-the-sixth-us-mass-shooting-in-seven-weeks-jewish-community-leaders-will-fight-attempts-to-restrict-abortion-in-virginia#comment-5907778243