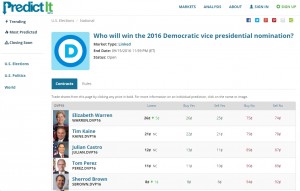 Personally, I think either Warren or Kaine could be an excellent choice for Clinton. In general, I feel like the more unified the Democratic Party is – let’s say Bernie Sanders comes on board strongly, also urges his followers to do the same – the more Clinton will feel confident in picking Kaine, who is most certainly well qualified for the job and would bring a lot to the ticket, but doesn’t set progressives’ hearts afluttering. On the other hand, the more divided the Democratic Party is – let’s say if Sanders continues fighting, doesn’t enthusiastically endorse Clinton, etc. – then I can see Clinton leaning more towards Warren, who most Sanders supporters and progressive absolutely love, and who many Sanders supporters would have backed if she had run for president.

So what do you think, and who do you prefer? Vote in the poll below and let’s see what Blue Virginia readers have to say. Thanks.

P.S. The brilliant Charles P. Pierce of Esquire argues that Warren should not be Clinton’s running mate, because (Pierce argues), Warren “does her best work when, as the Scripture says, she is praying somewhat outside the camp.”