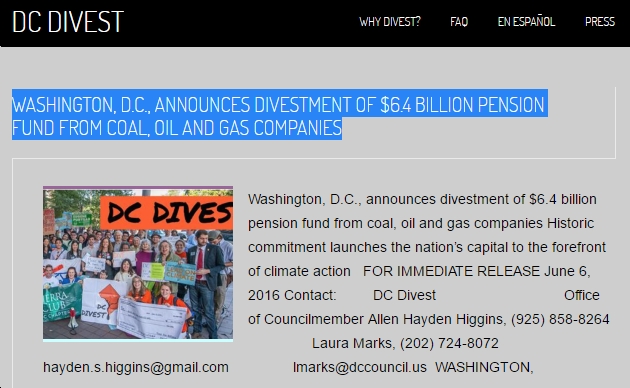 Any reason why Virginia can’t do this too?

The District of Columbia government announced Monday that its $6.4 billion pension fund has fully divested from its direct investments in 200 of the world’s most polluting fossil fuel companies. In doing so, Washington, D.C. has taken a critical step toward addressing climate change, joining the more than 500 cities, philanthropic organizations, faith groups, universities, and other organizations that have divested funds worth a collective $3.4 trillion.

The decision by the District of Columbia Retirement Board (DCRB) to sell off its fossil fuel investments underscores D.C.’s commitment to protecting environmental quality and ensuring that generations of Washingtonians will inherit a safe and stable climate. It also marks a significant victory for DC Divest, the citizens group that has led a three-year campaign aimed at promoting divestment in the District of Columbia.

“Time is up for the powers that be to act on climate change. If we’re going to take real action on climate change, we must take a hard stance against the fossil fuel industry,” said DC Divest spokesperson Matt Grason. “By divesting from fossil fuels, the nation’s capital has taken a critical step in creating the political will for climate action. Now it’s time for Congress to take note and pass comprehensive legislation to limit the carbon pollution driving climate change.”

So why aren’t we doing this in Virginia? Several reasons: 1) the influence of wealthy, powerful fossil-fuel-heavy corporations like Dominion Power; 2) the utter corruption of our political system, in which Dominion et al have “captured” the regulators and bought up the politicians; 3) lack of leadership – in fact, the opposite of leadership – from Gov. McAuliffe on this issue. Oh, and it’s also up to all of us to DEMAND that our state divest from environment-killing, life-destroying carbon-based fuels immediately. Beyond the moral and environmental reasons to do this, there are strong economic reasons as well, since the multi-trillion-dollar energy market of the 21st century is going to be heavily with clean energy, not dirty energy. The question is whether Virginia wants a piece of that action, or to be left in the (coal) dust? And no, this is not a difficult question to answer.