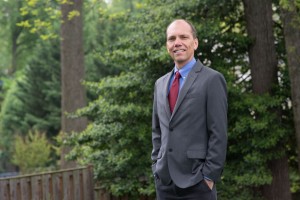 On Tuesday, Arlingtonians will hold a primary to select the Democratic nominee for County Board. The campaign between County Board Chair Libby Garvey and first-time candidate Erik Gutshall has been hard fought but Gutshall is by far the better choice.

Gutshall is a 20-year resident of Arlington with a distinguished record of civic voluntarism. As vice-chair of the Planning Commission, he has faced some of the most contentious land-use issues in the county. He’s also served on the Transportation Commission, as president of the Lyon Park Civic Association, and on the board of Doorways for Women and Families.

A successful small-business owner, Gutshall has seen firsthand how Arlington County policies can impact the growth of businesses we need to thrive. He’s a father of three children who attend Arlington schools and is committed to breaking down the silos between the County and School boards that for too long have plagued our planning process.

To be sure, Erik Gutshall is not a perfect candidate. A successful candidate must articulate a vision that connects personal values and experience to the challenges we face in this political moment. In short, it’s the ability to cogently explain why me and why now. Whether from political inexperience or poor campaign advice, his message has sometimes been more about how he is not Libby Garvey than why he is the right person for the County Board.

But Garvey has given Democrats even fewer reasons to support her. A 25-year veteran of both the County and School Board who has also run unsuccessfully for the House of Delegates and State Senate, Garvey has a knack for reading political tea leaves but a reputation for shirking detailed policy work. And she does not play well with others; in races from the School Board to the County Board, Garvey has rarely enjoyed the support of her colleagues. After a long career in public life, and a controversial first term on the County Board, it’s not at all clear what she wants to accomplish in another term.

Many Arlington Democrats have a legitimate beef with Ms. Garvey. After all, she committed political treason when she backed Republican-cum-Independent John Vihstadt over Democratic community activist Alan Howze in the special election to fill the board seat vacated early by Chris Zimmerman. This apostasy led to her resignation from the Arlington County Democratic Committee (ACDC) after the party’s Steering Committee acted to remove her. Although she has now rejoined ACDC, her decision to oppose the party’s nominee in the last election is reason itself to oppose her nomination.

This election, however, is about a great deal more than past political slights. Arlington’s commitment to citizen-driven government is at stake. In Arlington, we aspire to involve our bright and knowledgeable citizens in the workings of government. We ask them to evaluate issues and inform decisions before they are made. The payoff from all those meetings and public processes is supposed to be better decisions with broader community support.

The recent kerfuffle over the proposed Blue Ribbon Panel on Strategic Priorities is a prime example of a difference in approach that recommends Gutshall over Garvey. The Arlington Community Facilities Study Group, on which I served as former chair of the Arlington Public Schools Facilities Advisory Council, spent a year discussing how to satisfy diverse expectations with limited land and resources. The group made concrete recommendations to achieve more open, systematic and coordinated County Board and School Board decisions, including a process to improve communication and cooperation between elected bodies and staff.

But instead of adopting or even meaningfully debating these recommendations for making Arlington’s government work better, Garvey proposed to form a six-member panel with no public notice and no coordination with the School Board. The group’s task, to evaluate the County’s comprehensive plan and recommend changes, is a job already assigned to existing citizen commissions that have the responsibility for developing plan elements.

Gutshall has rightly criticized this approach, and in a 5-0 vote the County Board recently walked it back for belated public discussion. In Gutshall’s words, the blue-ribbon panel “moves us far away from the collaborative problem-solving that is part of Arlington’s DNA.” He’s right. Civic leaders, neighborhood activists and parents of school-aged kids are growing tired of processes that provide only the illusion of inclusion and put off the hard decisions for later. We can do better.

We need a leader who understands why the much-vaunted Arlington Way isn’t functioning as it should, and will commit to making it work again. Unfortunately, Garvey has shown no understanding of the underlying issues let alone a commitment to solve them.

In full disclosure, I was once a Garvey supporter. I served as volunteer press director for her first campaigns for school board and for her run for House of Delegates. But we began to part political company when she and former school board member Ed Fendley fought over whether to build a specialty program at the Reed School or a facility that could accommodate future elementary school growth. She supported the former and we are still paying for that mistake. In 2008, I – along with three of her then-school board colleagues – endorsed her opponent Karla Hagen. Garvey won.

Since then, Garvey has given me more cause for concern. Although she claimed to be agnostic on the Columbia Pike streetcar when she ran for County Board, she quickly opposed it upon election and spearheaded a divisive campaign to end the long-planned transportation and economic development project. One can argue, especially in light of Washington, D.C.’s troubled H Street streetcar rollout, that the streetcar was the wrong approach, but one cannot easily forget the dishonest campaign to develop an alternative bus-rapid transit system that itself cannot work on Columbia Pike due to the lack of a dedicated lane. We are still waiting for Garvey’s long promised plan to modernize transportation choices on the Pike. Garvey’s lack of support for the Community Facilities Study Group process is simply one more issue where we apparently disagree.

Elections, as they say, are about the future. I think it is time for new leadership to meet today’s challenges. I thank Libby Garvey for her service, but in this election Erik Gutshall is the right person to move Arlington forward.