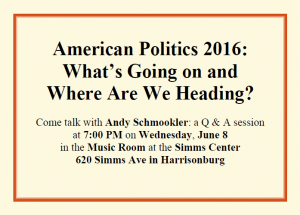 This is a revised edition, going beyond the information in the flyer to flesh things out a bit.

I’ll be talking with people about “American Politics 2016” in Harrisonburg on June 8. You’re invited.

After a few brief introductory words, I’ll take questions and respond to ideas from the audience on the following topics:

1) the 2016 presidential race, including the candidates their natures, their choices and their strategies — and how this election presents a great opportunity;
2) the state of American politics generally (specifically, how what we’re seeing now is a manifestation of a crisis has arisen in the American political system over the past generation); and
3) any issues raised by my recently-published book, “WHAT WE’RE UP AGAINST,” which claims to put our present national crisis into an integrated picture of how the human world works, and why.*

The event is free and open to the public. Come and create a lively interaction.

at 7:00 PM on Wednesday, June 8 in the Music Room at the Simms Center
620 Simms Ave in Harrisonburg

For background…For a sample of my thinking about American politics in 2016, click here. To find out about my new book, take a look at the Amazon page for “WHAT WE’RE UP AGAINST.”

If you’re within reach of Harrisonburg, I hope you’ll come and participate in this event.

* A note: those three “topics” are actually to be seen as part of one integrated picture. The 2016 campaign is a symptom of a long-standing political pathology. So “topics” 1 and 2 are part of an integrated picture. Then the question arises regarding how is it that destructive forces can arise and gain such power: that question is addressed in the book.

So Trump and Republican obstructionism and the torture memo are all connected with how constructive and destructive forces do battle in the human world. And with how and why such forces arose in the course of humankind’s emergence out of the system of life on earth.

And, one more thing: as I see it, being able to see things whole — to see the connections among the various elements and levels in the the picture — matters greatly. Liberal America has been weak, over the past couple of decades, in protecting this nation from the destructive force that has arisen on the right. And one important sources of that weakness has been the inability to see things whole.

Our being well-connected with a bigger picture is key to tapping into the moral and spiritual passions that the destructive force that has arisen on the right should kindle in us, making us strong.

The rise of Trump seems to be helping to kindle that deeper response, because his violations of the norms and ideals of Wholeness are so blatant. Trump has made it harder not to see what is at stake in the battle.

We live in dangerous but opportune times.