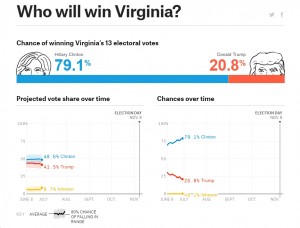 So, you ask, why should we listen to Nate Silver now, after he completely blew the Republican nominating process? Well, for starters, his methodology has a strong track record for general elections, particularly at the presidential level, in both 2008 and 2012 (e.g., see Triumph of the Nerds: Nate Silver Wins in 50 States). Second, Silver’s model is extremely thorough, rigorous, and also transparent — all great things. Third, if you don’t like 538, or simply as a sanity check, you can compare their forecasts to others, like the Princeton Election Consortium’s. Fourth, unless someone comes up with a better approach, one with a stronger track record at the presidential general election level, I see no particular reason to ditch 538 et al. But sure, take it with a grain of salt, or a pillar of salt, or however much NaCl you care to consume.

With those caveats, 538 today launched its 2016 General Election Forecast model, and right now it’s looking pretty darn good – although I won’t be satisfied until it’s 100% for Clinton and 0% for Trump, and the election is safely in the rear-view mirror – if you’re on the “blue team.”

The short answer is that 20 percent or 25 percent is a pretty reasonable estimate of Trump’s chances based on the polls and other empirical evidence. In fact, that’s quite close to where FiveThirtyEight’s statistical models, which are launching today, have the race. Our polls-only model has Trump with a 19 percent chance of beating Clinton as of early Wednesday afternoon. (The forecasts will continually update as new polls are added.) Our polls-plus model, which considers economic conditions along with the polls, is more optimistic about Trump, giving him a 26 percent chance.

Still, Trump faces longer odds and a bigger polling deficit than John McCain and Mitt Romney did at the same point in their respective races. He needs to look back to 1988 for comfort, when George H.W. Bush overcame a similar deficit against Michael Dukakis to win. Our models are built from data since 1972, so the probabilities we list account for elections such as 1980, 1988 and 1992, when the polls swung fairly wildly, along with others, such as 2004 and 2012, where the polls were quite stable.

What about individual states? Drum roll please…here’s the map and a few highlights.

So, bottom line: anything can happen, we should NEVER get overconfident, it’s still early, and every other political cliche you can think of. Having said that, I’d much rather be in Clinton’s position right now then in Trump’s. I’d also much rather be focused on running up a huge victory for Clinton, which hopefully will win back the Senate and even the House, plus as many state legislators and governors’ mansions as possible, then in freaking out about how much damage the top of our ticket might do to our “down-ballot” candidates. Having said all that, we need to work like our lives depend on this election, because frankly, given how insane and extreme Trump et al are, they do.