UPDATE 6 pm: Great to see Sen. Warner join Sen. Murphy’s filibuster and call for action against gun violence! I’m also very happy to hear him acknowledge that “thoughts and prayers” are not even close to sufficient, that we need Congress to do its job.

Ladd Everitt of the Coalition to Stop Gun Violence (CSGV) is referring to Sen. Chris Murphy’s filibuster, “refusing to allow the chamber to move on to other business until his colleagues do something about gun control.” So yes, it’s good to see Sen. Mark Warner, who has for years been proud of his “A” rating from the NRA, agreeing with Sen. Murphy that terrorists shouldn’t be able “to get their hands on powerful weapons,” but at this point – after Virginia Tech, Aurora, Newtown, Charleston, Orlando, Chicago (almost every day, it seems like) and a million other mass shootings in this country – we need more active, aggressive leadership from Sen. Warner and others in Congress on stopping the scourge of gun violence. 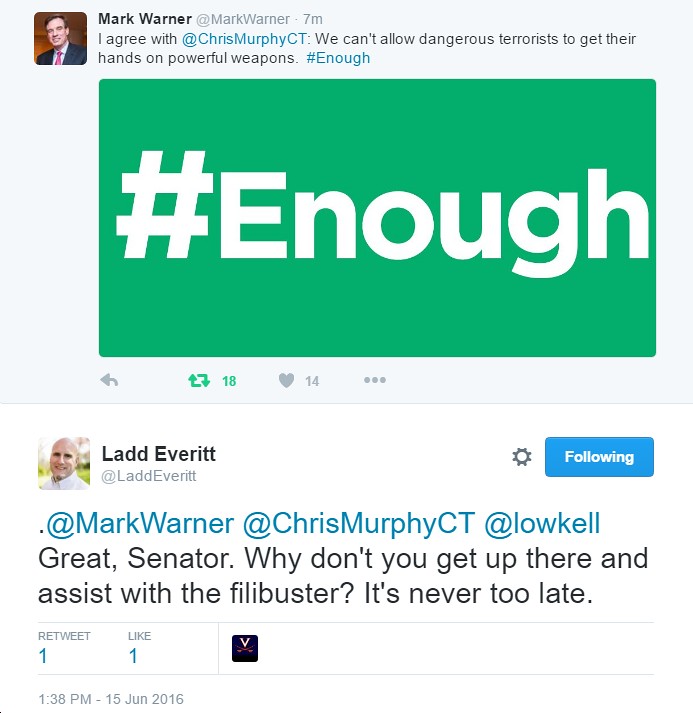 Getting a Gun in Georgia: Process to Approval and Mental Health Ramifications