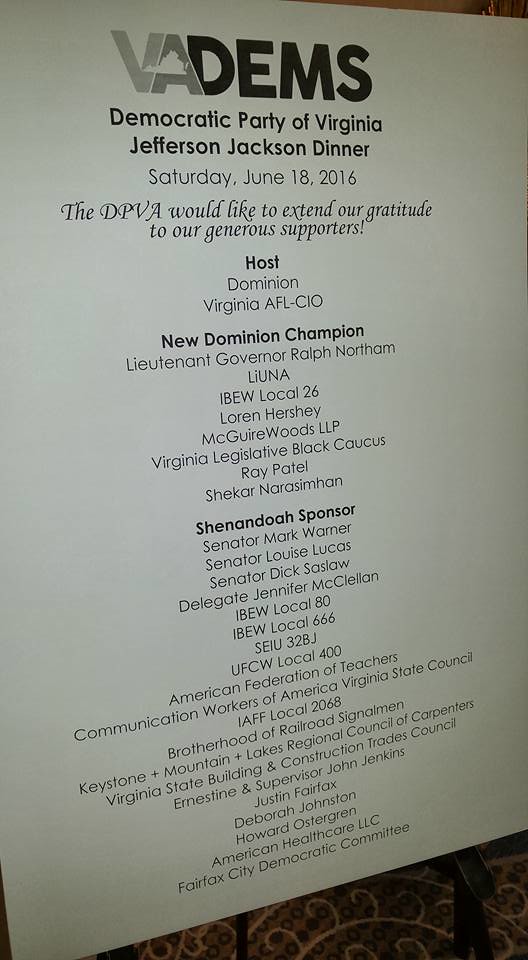 Check out that image, from last weekend’s DPVA convention, and note who the top “supporter” of the 2016 state “JJ Dinner” was. That’s right, supposedly “regulated” monopoly utility company Dominion Power, which uses the money WE send it every month in our power bills in order to purchase/capture our government. Lovely, eh?

Meanwhile, I just saw this article in the RTD, which reports:

The corporation gave $100,000 to the Democratic Party of Virginia in a lump sum check dated June 14, according to the Virginia Public Access Project, a nonpartisan tracker of money in state politics. VPAP said it is the largest single donation since 1997 made by the corporation to a Virginia campaign committee or candidate.

“It’s reasonable to infer that Dominion wants something,” said Dale Eisman of Common Cause, an advocacy group in Washington, referring to the DPVA and Republican donations. “That is a lot of money, and corporations are no different from you and me in that they typically don’t throw around a lot of money just for nothing.”

And the most important point: “As Virginia’s largest utility, Dominion often has major business before state agencies.”

So yeah, a huge, powerful corporation with frequent business and regulatory issues before stage government gets to give millions of dollars – certainly NOT out of the goodness of its cold, corporate heart – to make sure they get the policies they want, and to block the policies (e.g., a rapid shift to clean energy and distributed power) they do NOT want. Lovely.