If you’re a Democrat, you’ve got to like this prediction.

Our Electoral College totals have not budged: 347 electoral votes Safe, Likely, or Leaning to Clinton and 191 Safe/Likely/Leaning Trump.

So to us, the state of the general election has not shifted much at all in the nearly three months since we issued our first Clinton-versus-Trump map. Clinton remains a substantial favorite. If this is how the election actually turns out — and it probably won’t, at least not exactly, because there is a long way to go — Clinton would win a victory smaller than Barack Obama’s 2008 win (365 electoral votes) but bigger than his 2012 reelection (332).

I mean, in my mind, someone as completely unqualified and as dangerous as Donald Trump should not even win one electoral vote, let alone 191 electoral votes, but the main thing is to beat him, preferably badly enough that Democrats take back the U.S. Senate and even possibly the House. By the way, I’d make Virginia “likely D” not “leans D,” but I guess that’s quibbling at this point. 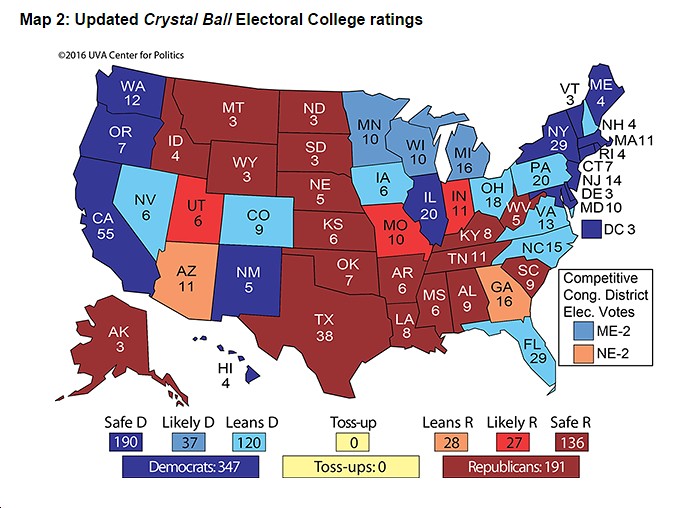