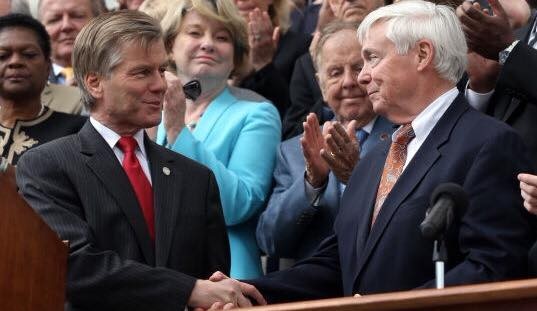 The strength of the American legal system is measured not by the guilty convictions it levies, but instead by the innocence it preserves. I am relieved for Bob, his family and the Commonwealth of Virginia. Bob will be the first to tell you he takes responsibility for his actions, but he is a good man with an honest heart. I have always been proud to call him my friend. Throughout this process, and even in the darkest hour, the depth of Bob’s character was on full display. His faith never wavered. He was a source of strength to his family. And he lifted the spirits of his friends and supporters when we should have been lifting his. Above all, his belief in the justice system persevered. That belief, and Bob McDonnell, were vindicated today.

OK, I could be missing it, so please correct me if I’m wrong, but does anyone see any language in here about:

Nope, didn’t think so. Because, sad to say, the Bill “ALEC” Howells of the world – and that includes Democrats like Dick Saslaw as well – think all of this is perfectly fine, that ethics laws are a big joke (Saslaw specifically said that no ethics law can stop someone if they have a “bad heart,” so why even bother?). More to the point, these guys benefit greatly from the current system, which combines “incumbent protection” districts, unlimited campaign contributions even from state-regulated companies and others with business before the state, lobbyists run amok, corporate front groups like ALEC writing our legislation, votes held in secret, trips to the Greenbrier on the corporate dime, governors who ride in Ferraris and take gifts of Rolexes but get off on technicalities, etc, etc. Ah, the “Virginia Way,” ain’t it grand?