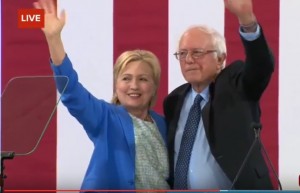 I am a very vocal and early Bernie supporter. When the DNC convention rolled around, I made a promise to myself that I will observe the convention with an open heart and as objectively as possible.

The convention had emotional speeches and amazing videos. What struck me the most was how the Clinton campaign and how Hillary herself embraced Bernie Sanders and his supporters. She allowed them to vent and go through a healing process. This willingness to listen and to compromise is a sign of a great leader. That is why I’m with her.

2008 was a historical election. President Obama is the greatest leader of our time. As historic as his presidency has been, this election of 2016 is the most significant election ever. The President said this election will define what we Americans are as a people. As the saying goes, love must trump hate.

Last week, the RNC convention was chaotic. Donald Trump and most other speakers portrayed a pessimistic, dark, divisive, doom-and-gloom world. This is not the America I know, nor is it the America I want my kids to grow up in. In stark contrast, this week’s DNC convention was the polar opposite – optimistic, upbeat, positive, unifying, looking to the future. I was moved by speeches from Michelle Obama to Joe Biden to Tim Kaine to President Obama and to Hillary Clinton herself. Additionally, the convention focused on important things like mental health issues, veterans, immigrants, etc.

Last night, when Charlottesville’s Khizr Khan, father of a fallen U.S. soldier of Muslim background, spoke, that was an emotional moment for me. I particularly loved it when Mr. Khan called out Donald Trump on his patriotism (“You have sacrificed nothing and no one”). As a Muslim and a veteran myself, I was proud of my fellow military brother in his sacrifice, and I was so proud of his father having the courage to speak.

Some of my fellow Bernie supporters say that this is exactly what conventions are designed to do. They are designed to tap into peoples’ emotions to persuade them to change their minds. For me, it worked; I was emotionally moved. In addition, Hillary Clinton clearly stated in front of the world last night that the Democratic Party has adopted a platform that will focus on fixing our rigged economy and helping those in need. A lot of what Bernie Sanders was advocating for was put in the Democratic Party’s platform. After watching this past four days, I am now very confident that Hillary Clinton will fight for the things Bernie was pushing for.

I have noticed a few Hillary supporters are frustrated and have been overtly critical of Sanders supporters. I want to say to these folks that they should look at Hillary Clinton and follow her lead. Try to be understanding. A lot of the younger folks who were energized this election cycle are the future of the party. We need to embrace them like Hillary Clinton has.

Over the next three months, I will be working on making sure people vote and vote only for HRC. Democrats are hoping that we get most of Bernie supports and majority of independents etc. Well, “most” is not acceptable. We cannot settle for majority or for 90% or for 95%; we need 100% of Bernie supporters to vote for Secretary Clinton this November.

Some of my friends who are unconventional voters have said they might not vote, or if they do vote they will write in someone like Bernie or vote for a third-party candidate. That must not happen. A no vote, or a vote for a third-party candidate, is de facto a vote for Donald Trump. We have to have faith in our leaders. I realize Hillary Clinton may not have inspired people like Barack Obama or her husband Bill Clinton. But if the past few days are any indication, she is a great leader just like them.
We witnessed testimony after testimony of how she has positively impacted so many people. That is why I cannot wait until November 8, when I will proudly and enthusiastically cast my vote for the first female President of the United States, Hillary Rodham Clinton. I urge all my fellow Bernie supporters to do the same. Thank you.
There's no paywall on Blue Virginia, and we definitely want to keep it that way! If you want to help support our work, you can donate here - thanks! Also, you can sign up for our weekly email list here.