From the Virginia House Dems; what a nightmare.

Have you been watching any of the crazy coverage coming out of the Republican National Convention? We have. We’ve been watching as the chants of “lock her up” make their way through the arena and as a New Hampshire State Representative (and Trump campaign advisor) announced that Hillary Clinton should be “put in the firing line and shot for treason.”

Even some Republicans are visibly nervous about being the Party of Trump. People like Mitt Romney, George W. Bush and John Kasich are all skipping the convention becauseeven they are not comfortable with Donald Trump’s hateful rhetoric. But not Delegate Scott Lingamfelter — he’s EXCITED about Donald Trump — and has even named the Republican “Dream Team” as his cabinet! You ready for his list? (you might want to sit down) — here it is: 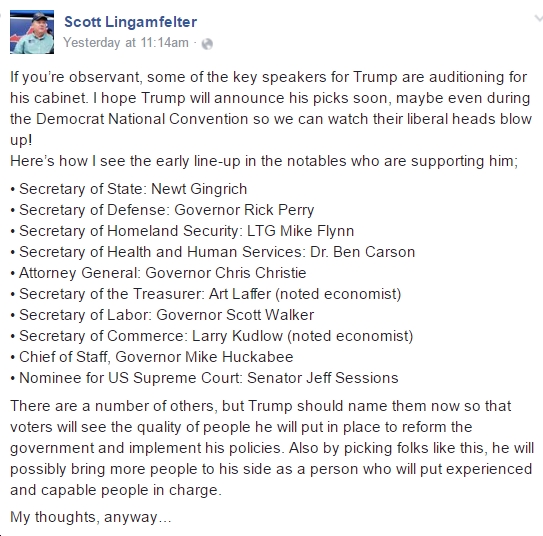 While there’s so much we could say about the names on this list, we’ll just let them speak for themselves.

If you’ve saved your payment information with ActBlue Express, your donation will go through immediately:

Or, donate another amount

He claims this Dream Team should be named so “we can watch their liberal heads blow up!” That’s wholly inappropriate — nobody on our team wants to see Donald Trump or Scott Lingamfelter’s heads blow up, we certainly don’t want to see anyone put in a firing line — we just want to see them soundly defeated at the polls!

It's not even 7 months into his term, and Youngkin's already bored with being governor of Virginia - and MUCH more focused on the 2024 presidential race... https://bluevirginia.us/2022/07/tuesday-news-the-ba-5-covid-surge-is-here-horror-in-highland-park-the-sixth-us-mass-shooting-in-seven-weeks-jewish-community-leaders-will-fight-attempts-to-restrict-abortion-in-virginia#comment-5907781482 h/t @CarterElliottIV

Good point by @BillKristol. It's interesting, by the way, that only 8% of Americans want to make our gun laws LESS strict, yet the Republican Party is mostly in sync with that 8%, certainly not with the 66% who want to make gun laws more strict! https://bluevirginia.us/2022/07/tuesday-news-the-ba-5-covid-surge-is-here-horror-in-highland-park-the-sixth-us-mass-shooting-in-seven-weeks-jewish-community-leaders-will-fight-attempts-to-restrict-abortion-in-virginia#comment-5907778243