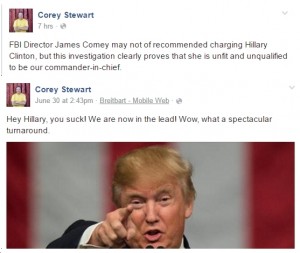 Yes, this is how raving xenophobe Corey Stewart – Chairman of the Board of Prince William County, the third-largest jurisdiction in Virginia by population, and also chairman of the Trump campaign in Virginia (but of course!) – speaks: rude, crude, obnoxious, ignorant, etc.

For instance, in his June 30th tweet (see above), Stewart actually writes, “Hey Hillary, you suck!” I mean, can you imagine just about any Democrat – Tim Kaine? Mark Warner? Don Beyer? Gerry Connolly? Bobby Scott? Terry McAuliffe? (or for that matter Republicans like Bob McDonnell, Bill Bolling, John Warner, Scott Rigell, etc.) – using language like that? Of course not. Meanwhile, Corey Stewart is the same guy who, a few weeks ago, referred on his Facebook page to “dirt bag liberal pieces of crap” (note that Prince William County went for Barack Obama over Mitt Romney by a whopping 16 points in 2012 — apparently, Stewart thinks the majority of his constituents are “dirt bag liberal pieces of crap”).

Other than being a crude, rude bigot and bully, Corey Stewart also isn’t the brightest bulb on the block. Check out his latest Facebook post, in which he mangles the English language (“may not of recommended” instead of the grammatically-correct “may not HAVE recommended“), not to mention completely fails to understand that the candidate he backs – the utterly corrupt Donald Trump – is about as “unfit and unqualified to be our commander-in-chief” as is humanly possible, while Hillary Clinton is (as President Obama stated today) one of the BEST qualified people ever to run for president.

By the way, speaking of “unfit and unqualified,” can you believe that Corey Stewart actually wants to be our governor??? Add “zero self awareness” to his fine list of character traits.