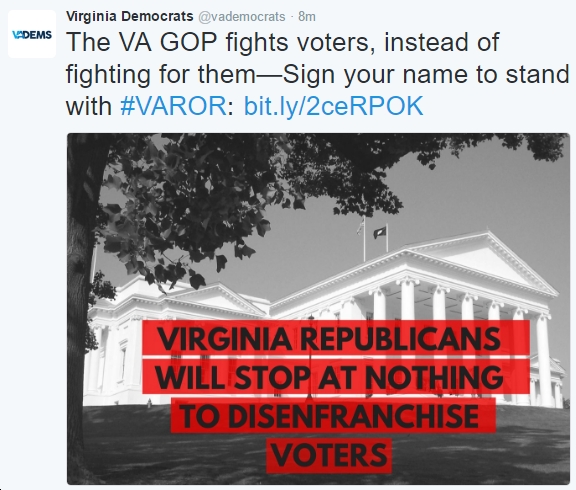 Sadly, the party of voter suppression and disenfranchisement – that would be the Virginia GOP, formerly the “Party of Lincoln” but now the “Party of Donald Trump” – has acted exactly as you’d expect them to act. Disgustingly.

Attorneys for Virginia House of Delegates Speaker William J. Howell (R-Stafford), Senate Majority Leader Thomas K. Norment, Jr. (R-James City), and four Virginia voters will file a contempt motion today against Governor Terence R. McAuliffe (D) with the Supreme Court of Virginia.  The petitioners are requesting an order from the Court requiring the Governor and other respondents to show cause for why they should not be held in contempt for violating the Supreme Court’s July 22 decision in Howell v. McAuliffe.

In granting a writ of mandamus against Governor McAuliffe and other respondents, the Court ruled that the governor replaced a general rule with a categorical exception, effectively suspending the constitutional prohibition on felon voting and violating the Constitution of Virginia’s anti-suspension provision.  The contempt motion argues that the effect of the August 22 action is practically the same as the first set of executive orders, resulting in another unconstitutional suspension of the laws.

“‘The practical effect’ of Governor McAuliffe’s August 22 decision to issue over 200,000 individual restoration orders is precisely the same: his newly announced process will effectively suspend Virginia’s general constitutional prohibition against felon voting for over 200,000 felons,” reads the motion.  “In both scenarios, the Governor has ‘effectively reframe[d] Article II, Section 1 to say’ what he wants it to say rather than what the People of Virginia actually inscribed in their Constitution.  This Court did not reduce the suspension clause of the Constitution to a printing requirement.  The Court held instead that the suspension clause is an ‘essential pillar of a constitutional republic,’ whose protections do not depend upon how many reams of paper and autopen machines the Governor deploys to work his will.”

The full motion can be found here.

Aside from being anti-democratic (small “d”) and fundamentally unAmerican, what Republicans are doing here is wildly hypocritical and also with no basis in Virginia’s constitution or law. On the first point, recall the howls from right wingers at “liberal activist judges” whenever a ruling has come down from the courts that they don’t like? Yet now, Virginia Republicans are effectively urging the (conservative) Virginia Supreme Court to become right-wing activist judges.

As for the Republicans’ complaint having no merit, the fact is that the “plain language” of Virginia’s constitution clearly states that the governor has full power “to remove political disabilities consequent upon conviction for offenses committed prior or subsequent to the adoption of this Constitution.”  Which is exactly what Gov. McAuliffe has been doing – or trying to do! – with ex felons. (Note that the Supreme Court’s July ruling stated clearly: “All agree that the Governor can use his clemency powers to mitigate a general rule of law on a case-by-case basis.”)

Finally, I’d repeat a point McAuliffe frequently makes, that the vast majority of states automatically restore voting rights to ex-felons once they’ve “served their time and paid their debt to society.” There’s no reason that shouldn’t be the case in Virginia as well, other than Virginia Republicans not wanting minorities to vote, since they know that the vast majority of African Americans and Latinos vote Democratic nowadays. Pathetic, but sadly not surprising.

P.S. As a smart attorney told me a few minutes ago, the Virginia Supreme Court “is making decisions based on no record; typically the court has evidentiary hearings, allows cross examination, etc…You can’t just come to court and say X is true, give me relief.”