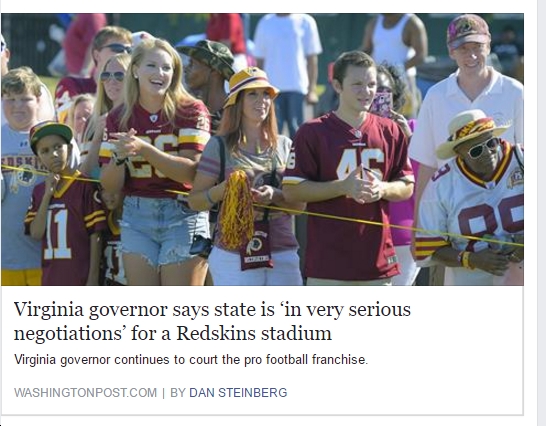 Yesterday, we read that the Virginia governor says state is ‘in very serious negotiations’ for a Redskins stadium:

“I view this as a Virginia team,” the governor said on ESPN 980 on Friday morning, during an appearance at the team’s training camp facilities in Richmond. “I know they’re in Maryland right now. But a majority of the season ticket holders are Virginians, all the players live in Virginia, we have all of your [practice] facilities. . . . We’re in very serious negotiations, as I assume other jurisdictions are. Listen, we would love to have them.”

While the team’s lease at FedEx Field doesn’t expire until 2027, owner Daniel Snyder has already hired a stadium architect, Danish firm Bjarke Ingels Group, which has released potential stadium designs. Officials from the District, where the team used to play, and Maryland, the team’s home for the past 19 seasons, have also expressed interest in a new stadium.

McAuliffe — who hosted Snyder, team President Bruce Allen and other officials at his mansion Thursday night — said Allen told him that about two-thirds of the team’s revenue comes from Virginia residents. The governor repeatedly cited the need to craft a deal that would be fair to Virginia taxpayers but said “if we can come up and be creative with a deal that works for everybody, then I think the team will be here.”

To put it mildly, I don’t think this is a good idea for many reasons. And from the looks of it, a lot of people agree with that sentiment. Here are excerpts from the top-rated comments in response to the Washington Post article (bolding added by me for emphasis):

#1-rated comment: “And who is to pay for this stadium that will hold only 10 events per year and cost at least $1 billion? It better not be Virginia or any government source for that matter. There are other priorities such as education and transportation.”

#3-rated comment: “I am adamantly opposed to spending ANY tax $ to bring the team to VA. It is past time for tax payers anywhere to be subsidizing major league teams. The owners are rich enough already. I am also opposed to bringing the team to Loudoun County. We have enough traffic already, and don’t need Sundays screwed up too.”

#5-rated comment: “You’ve GOT to be kidding me! Where in Virginia do you think you could put a stadium that could handle the traffic? South on I-95? West on I-66? Nobody will be able to see the game. They’ll be sitting in gridlocked traffic. ”

Also, check out this comment by a strong Virginia Democrat on Facebook, which I agree with 100%: “Governor Mcauliffe at a time when Virginia fails to pay for adequate hours for home care for people with disabilities, to expand Medicaid to large swathes of uninsured individuals and can’t provide a decent supply of affordable housing for low income individuals I plead with you not to spend precious taxpayer dollars on subsidizing a stadium for a franchise that prices most people out of attending anyway.”

And this one, from another strong Virginia Democrat on Facebook: “Ugh. This is the worst, bottom of the slippery slope example of ‘economic development.’ There’s no justifiable explanation for handing Dan Snyder a dime of public money.”

And this one, from former Del. Rob Krupicka (D) on Facebook: “Really hoping our state doesn’t get suckered into a rich guy vanity project that does nothing for real economic development. Why not spend some economic Dev money on small start ups…I know a few.”

I’d just add that, from a “smart growth”/environmental perspective, the best place to put a sports stadium for the D.C. region is neither in the Virginia or Maryland suburbs, but in the center of the region (aka, Washington, DC), near as much public transportation and other amenities as possible. This really isn’t that difficult a concept.

Gov. McAuliffe: please tell Dan Snyder where to shove it.