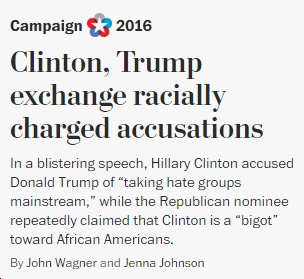 I already posted on this in the comments section of the Friday daily news clips, but I wanted to put it all together and make it easier to link to. So…

The Washington (Com)Post is like an Onion parody of “objective journalism.” In this case, they do the “both sides” thing, also instead of saying what the FACTS are, simply say that each candidate accused the other candidate of something really bad (in this case, bigotry/racism). Yet if the (Com)Post actually was about “objective journalism,” the headline would read “Hillary Clinton uses Donald Trump’s OWN WORDS and actions to ACCURATELY characterize him as running a campaign based on bigotry/racism, while Trump has ZERO basis for accusing Hillary Clinton of being a bigot.” Instead, the cowardly (Com)Post chooses to hide behind its faux-“objective journalism” stance…to the detriment of its readers and its own ever-lasting disgrace

P.S. The headline in the (Com)Post print edition is even worse, implying that what Clinton did was simply “dial up” “rhetoric.” That’s wildly inaccurate; again, what Clinton did was to quote Donald Trump’s OWN WORDS and cite Donald Trump’s OWN ACTIONS, all of which are 100% empirically, factually, demonstrably verifiable by a real journalist or anyone with access to Google. Why is this SO hard for the (Com)Post? Because, basically they are cowards – terrified of angering the “alt right” in this case, and the right more broadly… 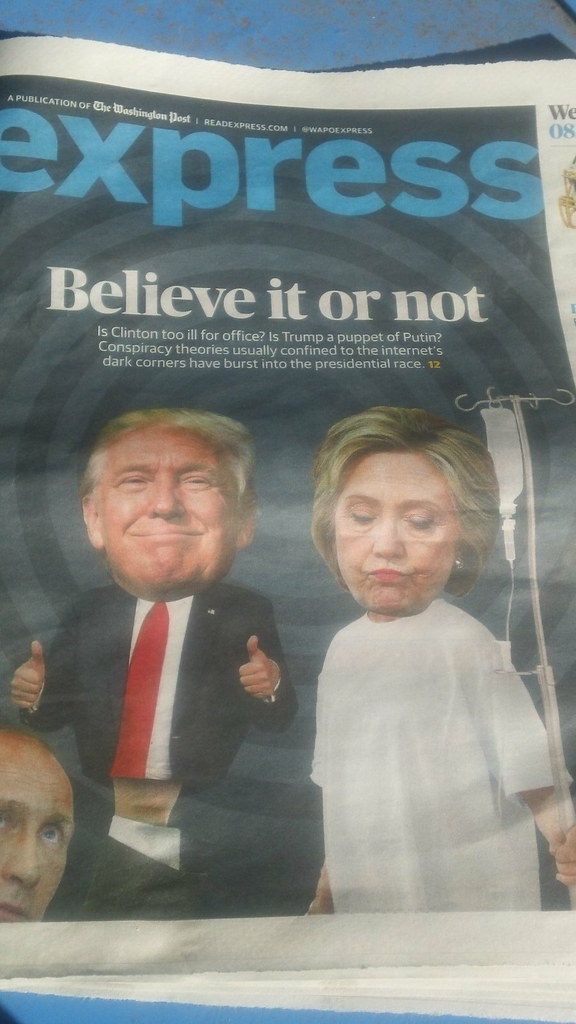 The Washington (Com)Post’s “Express” is even worse – massive false equivalency between: a) very well-reported (including numerous articles like this one in the Washington (Com)Post; and well-founded connections between Trump, Paul Manafort, etc. and the Kremlin; b) absolutely ZERO evidence for any Clinton health problems – total conspiracy theory in that case.

So, basically, the Washington Post is calling its own employees conspiracy theorists 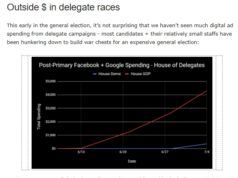 And then the Youngkin campaign completely botched this - pushing out an online "poll" which has zero validity, misspelling Farmville as "Farmeville," etc. And this guy wants to run Virginia?!? LOL https://bluevirginia.us/2021/07/friday-news-we-are-fiddling-while-the-world-burns-floods-and-chokes-pivotal-moment-with-delta-variant-cases-surging-imagine-a-9-11-panel-if-the-hijackers-had-allies-in-congress-biden#comment-5467174261 @maxasteele