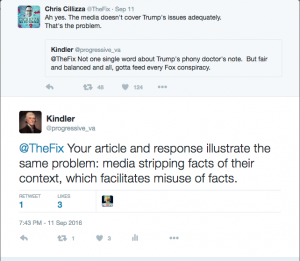 “Freedom of opinion is a farce unless truth is respected.” – Hannah Arendt

The media’s trashing of Hillary Clinton for so many minor transgressions, while repeatedly failing to stay focused on any of Donald Trump’s cases of corruption and possible criminality – including serious allegations of fraud, exploitation, bribery and rape – could bring us the nightmare of a Trump presidency.  But why would the media – one of the major targets of his hate campaign – provide any such assistance to this fascist thug?

I would describe the situation this way: the media — its best journalism drowned out by its louder and more sensational voices — is stuck on a flawed way of reporting that conservatives have learned how to exploit with mastery.  And the core of that approach is the obsession with BALANCE to the exclusion of what really matters – CONTEXT.

Enough have focused on the “false equivalency” problem that I’m not going to get into it (or how close the media comes to achieving balance) here. But few have drilled to the core of the issue of how the media facilitates the spreading of untrue memes that feed conspiracy theories and make the American public more confused and less informed, as opposed to the other way around.

While I believe that most in the media try to get the basic facts right, the core problem is this: facts are only meaningful in context – and stripped of their context, can be used and abused, to mislead people and spread the ugliest and most destructive of falsehoods.

Take, for example, the viral story from the FBI report on the fact that Hillary Clinton’s staff smashed at least two of her former Blackberries with a hammer.  Both the mainstream media and conservative outlets blew this detail completely out of proportion, seeing it, to use Politico’s term, as a “juicy bit”. It perfectly fit their narrative of an Evil Hillary doing something openly nefarious and sneaky — and yet clumsy enough to be clear to a 3-year-old, Cruella Deville style.

Yet out of the entire media universe, I’ve succeeded in finding only ONE story, in WIRED, providing even the slightest bit of context as to why Hillary’s staff would physically destroy a phone with sensitive national security information. Titled “Hillary Should Have Destroyed Her Phones Better”, the piece includes quotes from actual computer security and forensics experts on the worth of such practices:

Whether you’re a Secretary of State with a phone full of classified documents or an average sext-sending citizen, data removal is a crucial security step before you let a device leave your control or recycle it. And security experts agree there’s at least one surefire way to be certain that data is truly removed and unrecoverable: kill the hardware.

And I have not found ANY media outlets pointing out that physical destruction of sensitive media is part of actual Federal government policy – see the National Institute of Standards’ “Guidelines for Media Sanitization”, which includes the option of:

Disintegrate, Pulverize, Melt, and Incinerate: These sanitization methods are designed to completely Destroy the media.

A press whose primary mission is educating and informing the public would ask questions, do research and explain this context – that, contrary to the pervasive narrative that the Clinton staff destruction of her former Blackberries was some sort of mafia-style coverup, this act demonstrated caution in compliance with Federal requirements to protect sensitive media from falling into the wrong hands.

In this case, the press did exactly the opposite of what was required to inform the public – it put the context-free fact out there, reveled in the “juicy” revelation and stood by in amusement as the conservative world bashed Hillary ruthlessly for doing something that was neither criminal nor wrong.

As this example shows, the media’s bad habit of stripping facts of their actual narrative plays perfectly into the hands of a right-wing noise machine seeking to create phony narratives that bolster its ideological agenda.  This is precisely the dynamic that has led us to a Republican nominee with the shakiest grasp of, and highest disregard for, actual facts.

Just think about the potential for evil among people like Trump’s friend and ally Alex Jones, who haven’t the slightest compulsion about taking even the facts of the slaughter of innocent children at Sandy Hook and recasting them into a narrative in which the murdered and their survivors are only “crisis actors” in a play designed to hurt the “real” victims, gun owners.

The media’s carelessness combined with conservatives’ cynicism thus brings us to a place where our democracy is, for the first time in American history, under the threat of succumbing to fascism.  The political philosopher Hannah Arendt, author of The Origins of Totalitarianism, would’ve recognized what’s going on here, because she watched it happen in Hitler’s Germany and Stalin’s Russia.

Certain groups of people who feel alienated from the rapid changes of modern times will prefer to have a new narrative constructed that makes them feel better, even if it is completely at odds with reality. Arendt recognized that people are likely to retreat into the insane world of a totalitarian regime only once their capacity for common sense has been destroyed. Only if they are alienated from the context of the world around them can they replace that reality with the comfortable but false alternative reality provided by a comprehensive ideology .

In this situation, little lies won’t do the trick:

Since facts always occur in a context, a particular lie — that is, a falsehood that makes no attempt to change the whole context — tears, as it were, a hole in the fabric of factuality,…As long as the texture as a whole is kept intact, the lie will eventually show up as if of its own accord.

This is precisely why “the modern political lies are so big that they require a complete rearrangement of the whole factual texture — the making of another reality, as it were.”  Hence, the value to totalitarians of the Big Lie — be it that Jews were a threat to 1930s Germany, or that immigrants are destroying the U.S. today.

The more facts pulled out of context, ripe for rearrangement into politically powerful new narratives, and the more people confused regarding what is true or false, the larger the mass of people vulnerable to being sucked into such deadly ideologies.

We are thus caught in a tragedy, in the classic Shakespearean sense that the fatal flaws of the protagonist — the American media, in this case — drive us all toward a horrible result that most of us really don’t want.

The only way out of this tragedy is to pressure the media every single day to provide the full story — not just isolated facts ripe for plucking into the latest conspiracy theory.  When they don’t ask the essential questions, we have to do so, and then demand they work to answer them fully.

There is too much at stake today to just sit back and enjoy the usual media circus.  Our media needs to more consistently learn to respect and give us, not just individual facts, but the whole, contextual truth — before those who sell us Big Lies gain unchallenged power to impose them.

Friday News: “We are fiddling while the world burns, floods and chokes”; “Pivotal Moment” with Delta Variant Cases Surging; “Imagine a 9/11 Panel If...