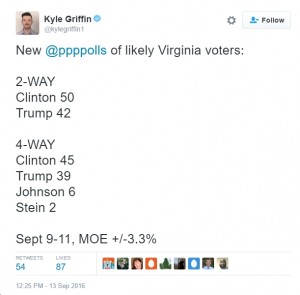 Not bad numbers overall in Virginia, according to Public Policy Polling (PPP), although down from the double-digit leads Clinton held a few weeks ago in polls by NBC/Marist, CBS News, etc.  Here are the highlights:

As I almost always do, I find myself in the majority on all these questions, as I suspect most readers of this blog do as well, with Trump supporters in the minority – often the small minority. What’s amazing is that on issue after issue, Virginians – and Americans more broadly – tend to be progressive, yet Republicans still manage to win elections. As Donald Trump likes to say – SAD!