From today’s Clarendon Day festivities in Arlington, check out the Republican booth, complete with a big Trump (should be “Make America HATE Again”) sign, a volunteer with a Trump for President 2016 (he’s the guy making a comment about my camera), and a bunch of Trump signs in back. In other words, Arlington Republicans enthusiastically support a guy who is: a pathological liar, a bigot, a demagogue, an authoritarian, someone who encourages and/or winks at violence (including against his opponent), a climate science denier, an ignoramus, corrupt, etc, etc. Great, huh?

Meanwhile, at the Democratic booth, it was pretty basic: a few Clinton-Kaine signs, cards to sign up for volunteering, the Democratic “grip card,” stuff like that. One hard-core Democrat I was talking to told me she thought the Clinton campaign was really making a mistake in not giving away bumper stickers (she told me that at one event she was at, they were asking for $5 per sticker, and supposedly a lot of people walked away grumbling). I mean, compared to the cost of one TV ad – and you probably know my feelings on TV ads (hint: they’re worthless for the most part) – bumper stickers cost next to nothing. I really don’t get the thinking behind those priorities.

Anyway, it was good seeing a bunch of Democrats out campaigning today at Clarendon Day in Arlington, including School Board candidates Nancy Van Doren and Tannia Talento and School Board member Barbara Kanninen (see photo below). It was also good chatting with 2015 Arlington County Board candidate Andrew Schneider for a couple minutes, and seeing super-Dem Josh Katcher for once not doing politics (his wife Jillian was making sure of that! LOL)

P.S. This morning, I was walking through Clarendon and Independent (in previous years Green Party) County Board candidate Audrey Clement – clearly not recognizing me in my workout clothes and baseball cap – asked me if I worked there. I said no and continued on to the gym…didn’t see her later in the day. 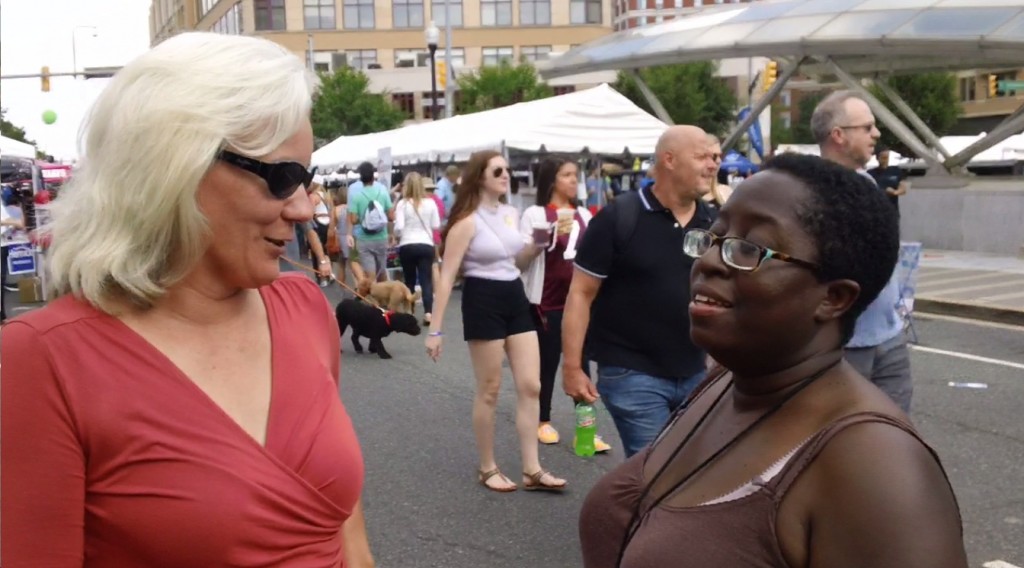 "SPOTTED: Denver Riggleman walking into Liz Cheney’s office — comes as he is being considered as a potential GOP adviser for Jan. 6 select committee." https://bluevirginia.us/2021/07/thursday-news-from-china-to-germany-floods-expose-climate-vulnerability-ridiculous-vaccine-myths-cripple-u-s-uptake-as-delta-surges-trump-and-the-gop-spin-fantasies-t#comment-5465940815 h/t @Olivia_Beavers