First, here’s Virginia House Speaker Bill “ALEC” Howell linking to a brain-dead, click-bait story by the Washington (Com)Post and claiming – against reams of evidence against the conspiracy theory – that there IS voter fraud, there really IS IS IS! Except that…no, as Del. Marcus Simon (see his comments below Howell’s) and a gazillion studies have shown, there isn’t. But obviously, Republicans keep claiming there is, because most of them don’t want to outright admit that their aim is – as a recent court decision stated – to “target African Americans with almost surgical precision.” Also Latinos and others likely to vote Democratic, of course. Yet here’s Bill “ALEC” Howell, incredibly the Speaker of the House here in Virginia, yet again pushing the “voter fraud” conspiracy theory. Ugh. 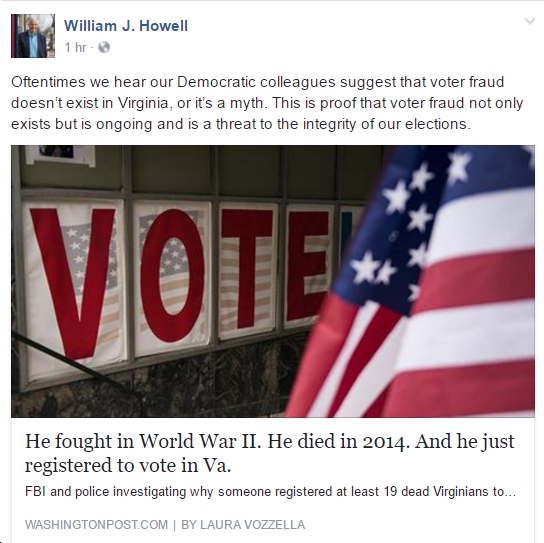 This is complete and utter nonsense. Someone explain to me how this was every going to turn into a vote. Was an 87 year old impostor being recruited to impersonate him at the polling place on election day? They used his actual mailing address. If he requested an absentee ballot it would have been mailed to his family, just like the congratulatory letter referenced in the story.

Or could it be that someone was hired to register voters and had a quota and got lazy and tried to cheat?

So that’s conspiracy theory #1 by Virginia Republicans for today. And now – as if that one wasn’t bad enough – here’s #2 (yeah, in that other sense of the word as well), utter crapola from Donald Trump’s Virginia chair, Corey Stewart, linking to extremist lunatic Alex Jones’ “Infowars” site. Note that Alex Jones, among other things, “has accused the US government of being involved in the Oklahoma City bombing and the September 11 attacks,” has claimed that the horrendous Sandy Hook elementary school shootings, which resulted in the tragic deaths of 20 children and 6 adult staff members, was a hoax of some sort.

Sandy Hook is a synthetic completely fake with actors, in my view, manufactured. I couldn’t believe it at first. I knew they had actors there, clearly, but I thought they killed some real kids…The general public doesn’t know the school was actually closed the year before…It took me about a year with Sandy Hook to come to grips with the fact that the whole thing was fake. I mean, I couldn’t  believe it. I knew they jumped on it, used the crisis, hyped it up. But then I did deep research–and my gosh, it just pretty much didn’t happen.

So yeah, Alex Jones is a ghoulish, evil freak (also someone who, appallingly, Donald Trump thinks is “amazing”). Anyway, this is the lunatic who Trump’s Virginia chair, Corey Stewart, links to here. And why the link? To claim, completely erroneously, that a bunch of online “polls” with zero statistical validity demonstrate that “Trump wins first debate!” Anyway, that’s Corey Stewart for ya…”deplorable,” you might even say. 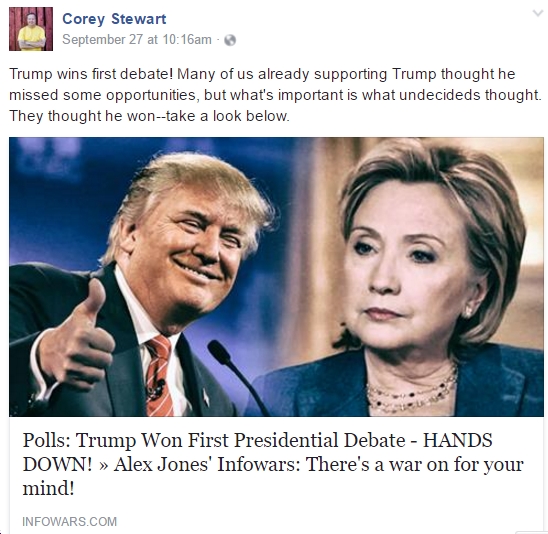