A few days ago, a Fairfax County voter posted something alarming on facebook:  his wife had received Democratic literature in the same envelope as her ballot!  The post went viral because it confirmed many people’s suspicions that the election was being “rigged.”

Soon enough, a reporter picked up on it and posted the story, Dem Materials Sent with Absentee Ballot, on a Washington-based news radio site, as well as on World Net Daily (I will spare your browser and not post the link).  If you’re not familiar with WND, they’re an apocalyptic nationwide right-wing news site that gets a lot of traffic.

Meanwhile, I engaged online with the voter and the reporter to try to debunk the story.  The reality is that my office gets lists of people who request absentee ballots, and we send letters that arrive at roughly the same time as the person’s ballot (which comes separately from the Office of Elections).

Sooner or later, angry Trump supporters were calling the State and local Offices of Elections about it.  And I heard that it was brought up at the local GOP’s poll watcher training.  The story got legs and was posted all in many excitable corners of the internet. 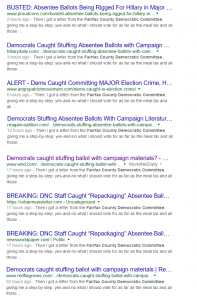 At the Fairfax County Democratic Committee, we pushed back with a press release and spoke with the original reporter, who posted a follow-up story.  But of course that didn’t dissuade people.  Our friends at The Bull Elephant, a Virginia conservative blog, re-posted the original story from WND even though it had been debunked.

As iit turns out, the voter who started this now at least believes that my office was not responsible, yet still thinks someone at the Office of Elections is stuffing our materials into ballot envelopes for some reason. (Not only is that impossible, as the process is overseen by Democrats and Republicans, but think about it: if someone handling ballots wanted to commit fraud, why wouldn’t they just mark the ballots and submit them?)

As the reporter pointed out in the second story, people on Reddit have taken off with the false claims, and some other recipients of our letters are “corroborating” it.  The subreddit “r/TheDonald” is a hotbed of alt-right conspiracy theory activity where supporters are free to speak their minds anonymously.  The particular post about this story includes commenters calling for Hillary Clinton’s execution and saying of the Postmaster General “Great, just what we need. Another liberal vagina ignoring felonies in America.”

It goes to show that, as Winston Churchill said, a lie gets halfway around the world before the truth has a chance to get its pants on.