Amazing that this illiterate buffoon is a Virginia State Senator, but sadly Charles William “Bill” Carrico is – badly misrepresenting Virginia’s 40th State Senate district. This is the same clown, by the way, who in 2015 introduced legislation “that a clerk or deputy clerk shall not be required to issue a marriage license if such clerk has an objection to the issuance of such license on personal, ethical, moral, or religious grounds.” Carrico also proposed “to defund Gov. Terry McAuliffe’s armed security detail after he banned guns on government grounds and ended concealed weapons reciprocity agreements with 25 states.” Yeah.

So anyhoo…I guess it’s not surprising Carrico would post the following, bizarre rant on his Facebook page — numerous typos and errors (“Clinton’s”; “candidates behavior”; “the statement made by Mr. Trump 11 years ago” – uh, it wasn’t a “statement”) included — comparing Trump to Samson, because both men were/are “arrogant,” “womanizer[s],” “proud of his looks and his hair,” blah blah blah.

Uh, alrighty. In all seriousness, though, one thing Trump and Samson certainly DO have in common is that both, in the end, were/are willing to pull down the “temple” on top of themselves. Except that in Trump’s case, the “temple” is American democracy and really the entire country – and all for completely  narcissistic, nihilistic reasons. Anyway, however strained the analogy, the bottom line is that Senator Carrico sees Trump as the 2016 version of Samson, which is why you should vote for him. Or something; probably best not to think too hard about this one… 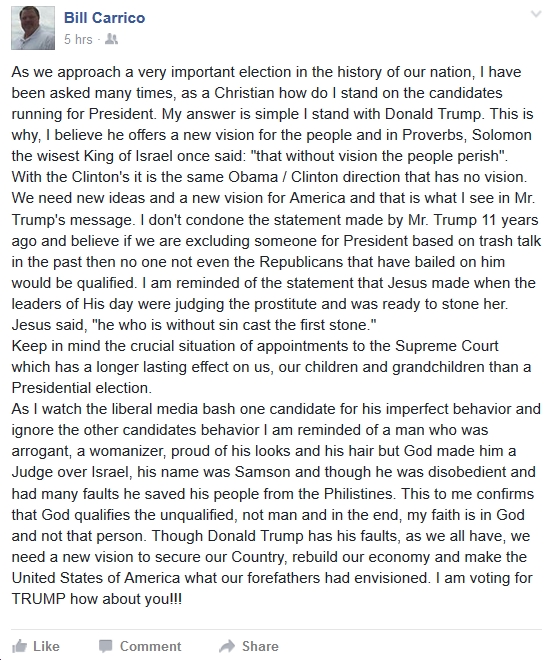