Fairfax County residents will have a referendum on their ballot this November regarding a 4% tax on prepared foods.  70% of the revenue from the tax would pay for schools, and 30% for county services such as libraries and fire stations.

It’s a once-in-a-generation opportunity to bring much-needed support to our public schools, which have been struggling under budget constraints that lead to higher class sizes, cuts in extracurricular programs and the loss of teachers who can earn $15,000 more in neighboring districts.  This affects county residents whether or not they have children in the schools, since our school system is the main factor that leads to our high property values and excellent quality of life in Fairfax County.

Counties in Virginia don’t have a lot of options for raising revenue.  Most of it comes from property taxes, putting the bulk of the burden on homeowners. But if approved by vote, the citizens of Fairfax can diversify the revenue stream and reduce the reliance on housing taxes.

Lacking a mobilizing force on the top of the ticket, Republicans have galvanized around this ballot issue in the hopes that it would unify both wings of the party.  After all, being reflexively anti-tax is something they can all agree upon.

The organization “Fairfax Families Against the Food Tax” doesn’t seem to include very many families, though.  In fact, if you look at their campaign finance report, filed for the period ending August 31, 100% of their funding comes from restaurants and others in the foodservice industry.  Most notable: $10,000 from Great American Restaurants (includes Sweetwater, Coastal Flats and others), and $5,000 each from Glory Days and Clyde’s.

I might be a political employee in my day job, but before that, my career was in the food service industry. I worked for ten years at grocery stores and restaurants such as Whole Foods and Glory Days.  I’m a product of Fairfax County Public Schools, husband of a FCPS teacher, and I have a child in the school system.

My Fairfax County Supervisor Pat Herrity, a recipient of over $64,000 in donations from the restaurant industry, is an outspoken opponent of the meals tax.  Recently on the Kojo Nnamdi show, he pretended that he cared about restaurant workers and the poor.  Well, I’ve been poor and a restaurant worker, and I would always make sure I could afford it whenever I decided to buy prepared foods.  And nobody has ever seen someone in the town of Vienna or City of Falls Church abandon their localities just to buy dinner in Fairfax because of the absence of a food tax.

So I’d like to shine a little light on the opposition.

First of all, their slogan “stop the food tax” (as opposed to the “meals tax”) is misleading because the tax only applies to prepared foods.  They’re hoping, however, that people who don’t read too much into it would believe it’s a tax on all foods. 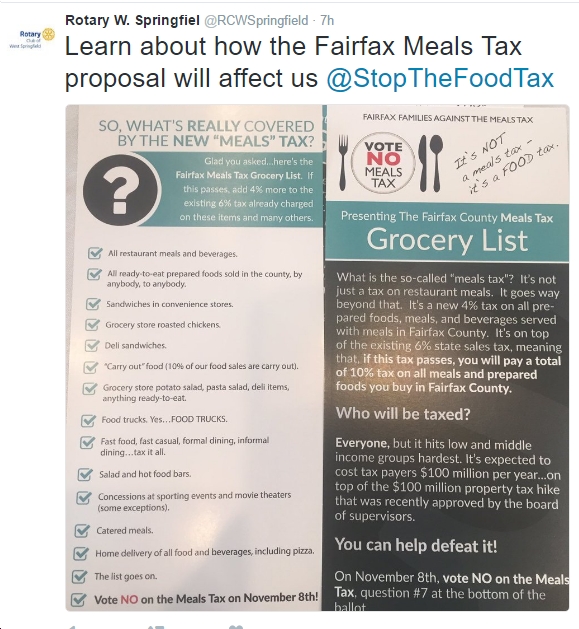 Secondly: Republicans’ newfound concern for the poor and for restaurant workers is nothing but a cynical ploy to use them as political props for their anti-tax crusade.  The reality is that low-income families would be helped the most by the revenue through improvements to the county schools and services that we rely on.  Also, restaurants will not lose business and servers’ tips would actually increase when the percentage tip is based on the total bill.

Third:  Let’s be clear about who “Fairfax Families Against the Food Tax” really is.  On their website, they describe themselves as “a coalition of local restaurants, businesses, and organizations.” On the list of members, who gets top billing?  That’s right — Americans for Prosperity, the Koch Brothers front group.  Not listed is the local Fairfax County Republican Committee, even though they are some of the top organizers for this effort.

What’s the point of bringing all this up?  Simple: to let Fairfax County voters know what we’re up against, and hopefully to mobilize in support of the meals tax, which I will gladly pay in order to keep our schools world-class.  We know the opposition is really gearing up.  Herrity is hosting a reception late this month for $250 to $25,000 per person.  They’ve made it clear that there are no limits on contributions to a referendum committee.  Late expenditures will translate to an onslaught of deceptive mailers, phone calls, signs and people on the ground at the polls and at your door.

I recommend that voters join the Invest in Fairfax movement, volunteer and educate their neighbors about this important initiative and vote YES on the meals tax referendum.  Sign up to canvass or spend some time at your local polling place.  Fairfax is a great place to live because we maintain one of the best school systems around.  Let’s work to keep it that way.