So FINALLY, after months and months of her party’s nominee for President making outlandish, paranoid, bigoted, misogynistic, xenophobic, anti-Latino, anti-Muslim, nasty, authoritarian, science-denying, just-plain-crazy, and many other “deplorable” comments on a wide range of topics, Barbara Comstock has denounced Trump and urged him to drop out of the race?

Well, sorry, but at this point it’s wayyyyy too late for that, especially since it’s glaringly transparent that the ONLY reason Comstock’s doing this now is panic over possibly losing her election to Democrat LuAnn Bennett (see BREAKING: Politico Reports on VA-10 Poll — Comstock 47%-Bennett 45% for more on that front).

But seriously, what about Trump’s latest comments was any worse than any of this sludge (quoting Tim Kaine from the VP debate earlier this week)?

And I just want to talk about the tone that’s set from the top. Donald Trump during his campaign has called Mexicans rapists and criminals. He’s called women slobs, pigs, dogs, disgusting. I don’t like saying that in front of my wife and my mother. He attacked an Indiana-born federal judge and said he was unqualified to hear a federal lawsuit because his parents were Mexican. He went after John McCain, a POW, and said he wasn’t hero because he’d been captured. He said African-Americans are living in Hell. And he perpetrated this outrageous and bigoted lie that President Obama is not a U.S. citizen.

Or how about the cesspool of corruption (and failure) that is Trump’s business career? His disdain for science? His advocacy of war crimes (e.g., torture, taking other countries’ oil, killing terrorists’ families intentionally)? His encouragement of violence, including potentially towards Hillary Clinton? His playing footsie – at the bare minimum – with the “white nationalist” movement, including vicious anti Semites? His praise for dictators like Vladimir Putin and Kim Jong-Un? We could go on all day, but the point is: NONE of that was enough to get Barbara Comstock to condemn Trump, let alone call for him to drop out.

So now, clearly in panic mode over her (dwindling?) reelection chances, Comstock finally says something she should have said a loooong time ago. Do her words have any credibility at this point? No, of course not. Remember, this is the same person called an “almost unhinged” “Professional Clinton Hater,” for good reason. More broadly, Comstock’s career has been one of a Republican attack dog, oppo researcher, and shadowy right-wing operative. So no, of course nobody should believe a word she says – about anything. The top-rated comments to the Washington Post article on Comstock’s (belated, insincere) condemnation of Donald Trump kind of say it all.

22 “likes”: “So this was the tipping point for Ms. Comstock? None of the other stuff, like the racism and xenophobia, the lying, the tax manipulation, etc.? She’s as morally bankrupt as Trump is. The fact that this is one of our national legislators is nauseating, and is a worry for the republic.”

18 “likes”: “Republicans did not disavow Trump when he attacked the vets, Muslims, Mexican, women, handicapped, etc. Only now “some” are calling for him to step down. Mitch McConnell still wants Trump to fix this. The GOP needs to be voted out of both the congress and Senate.”

16 “likes”: “Nope, Sorry Rep. Comstock, the GOP presidential nominee won his position fair and square through the Republican primary system. Mr. Trump is the orange embodiment of all the sly racism and overt obstructionism the GOP has employed to prevent government and particularly the President from governing effectively. By your own words and actions you are just as responsible for the inflamed mobs following Trump as he is.
Take a long hard look at Mr. Trump. He is an embarrassment, a menace, and your party’s official image in 2016.”

15 “likes”: “Until Republicans can criticize Donald Trump without saying “but also Hillary Clinton is bad”, I take their words to be meaningless and insincere.”

14 “likes”: “Republicans were warned about Trump. After Trump attacked veterans, Latinos, the disabled, Obama’s birth origin, wive’s of his opponents, blacks, and Muslims while praising midget strongman Vladimir Putin, but you still would not listen. You own it.”

14 “likes”: “Too late for the rats to jump from the sinking SS Trump. All the Repubs that did not repudiate him before, were hoping they could skate and be on board in case lighting struck and he got elected, but if he didn’t, he didn’t commit even more egregious disasters than he had til now. No excuses — you own this degenerate. Vote every single Republican out that you find on your November ballot that had not repudiated him before tonight. Their shock and outrage is total 11th hour CYA fakery…”

Finally, check out the following, and tell me how sincere Comstock really is at this point… 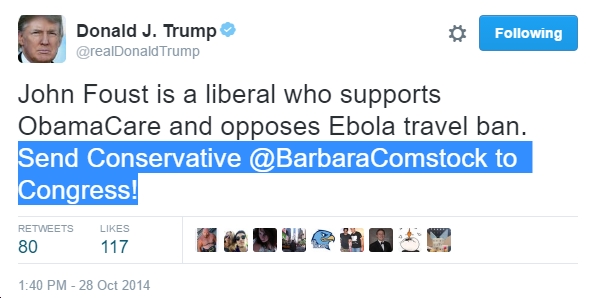