fThere’s increasing chatter on the intertubes (and boob tube) that the Republican Party is melting down, in civil war, being “blown up” by Trump, etc. This, in turn, has led to fears among House Republican leaders that their seemingly safe majority — a 247-188 majority, meaning that Democrats would need to pick up 30 seats to take back the House — could be in jeopardy. Of course, a 2006-style Democratic “wave,” big enough to take back the House, is probably still be long shot, but it’s something we weren’t even taking seriously a week or two ago. 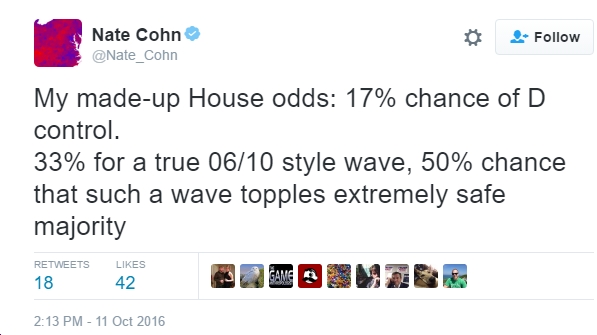 So, according to Nate Cohn, there’s a 33% chance of a 2006-style Democratic “wave” election, in which Democrats picked up 31 seats (almost identical to the number we need to pick up now in order to take back the House). Are you a “glass-half-empty” or “glass-half-full” type of person? If you’re the latter, you might just look at that analysis and say “I’ll take those odds!” Also, what if Nate Cohn is being too cautious and/or the Trump/GOP meltdown worsens? I was chatting with two knowledgeable Democratic sources a few minutes ago, and one was musing that Dems could shoot for as many as 50 more House seats, while the other said that the DCCC senses a “wave” and is “going to throw  everything they have at taking back seats…go into massive debt.”

Also, check this out: 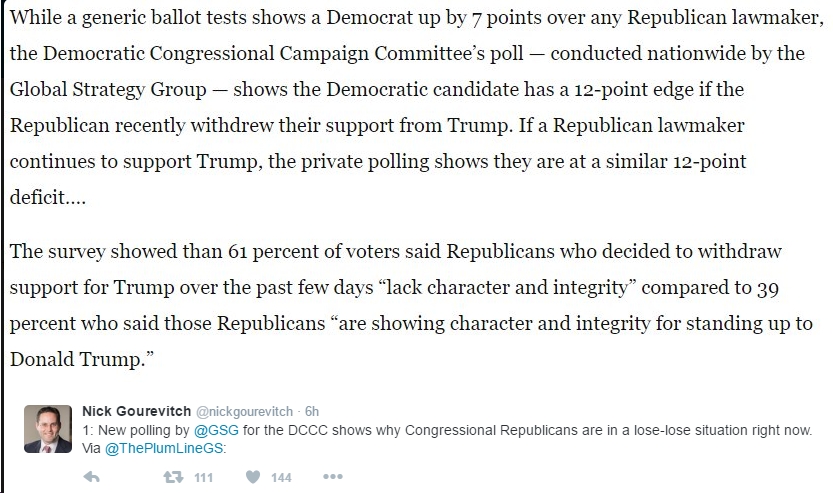 OK, so just for fun, let’s say there IS a huge Democratic “wave,” enough to pick up 30-50 seats in the House. What would that mean for Virginia? According to Larry Sabato’s House ratings, Virginia currently has one “safe” Democratic pickup (Donald McEachin in the 4th CD open seat/redistricted race), plus one Republican “lean” (Barbara Comstock in the 10th CD) and one “likely” Republican (Tom Garrett in the 5th CD open seat race). Overall, Sabato lists 42 Republican House seats as potentially vulnerable – including the Virginia ones I mentioned. Ergo, a Democratic “wave” of 30-50 seats could put a lot of those, if not all of them, in play.

Here in Virginia, in my view that would mean a likely Democratic pickup in the 10th CD (LuAnn Bennett over Barbara Comstock), as well as a highly-possible win in the 5th CD for Democrat Jane Dittmar over right-wingnut Tom Garrett. Along with the almost-certain pickup of the 4th CD by Donald McEachin, that would shift the Virginia House delegation from its current 8-3 Republican majority back to essentially where it was in 2009-2010 (a 6-5 advantage for the Dems), before the Tea Party wipeout election took out Tom Perriello (5th CD), Glenn Nye (2nd CD) and Rick Boucher (9th CD).

Could any other Virginia districts get swept up in a major Democratic “wave” election? First, I’d note that it’s highly unfortunate Dems don’t have a strong, well-funded candidate in the 2nd CD, as that’s a “swing” district AND an open seat, but unfortunately we don’t. Sigh. Another prime target might be Dave Brat, as he’s so extreme, crazy, etc. Plus, we have a strong candidate in that district (the 7th CD) in Eileen Bedell. Still, that’s a tough district (Eric Cantor won 58% of the vote in 2012; Brat won 61% in 2014), so it would have to be quite a “wave” to pull out a win there.

It also would be great to see Kai Degner manage to knock off the horrendous Bob Goodlatte (or as I call him BADlatte) in the deep-red 6th CD, but again, that’s a super-tough, gerrymandered-for-incumbent-protection district (Goodlatte won 65% in 2012 over our own Andy Schmookler). There’s also the 1st CD, which looks more promising in terms of partisan “lean” (Kaine won 47% there in 2012), except that the Democratic candidate, Matt Rowe, has essentially no money or name ID, and is up against a well-funded incumbent in Rep. Rob Wittman. So that one would probably take a tsunami, sad to say. Same thing with the 9th CD, which has a horrendously bad Congresscritter in Morgan Griffith and a solid Democratic nominee in Derek Kitts, but also an overwhelmingly “red” hue these days (yep, people voting 180-degrees against their own interests – ugh).

Anyway, interesting times with just under four weeks left in this (interminable) 2016 election. Plenty of time for a Democratic “wave” to develop…or to fizzle out. Let’s just hope the former scenario kicks in, and work to make it happen!

P.S. If there’s any chance of a “wave” election developing for Democrats, I certainly hope we see some top Dems (e.g., Barack Obama, Michelle Obama, Joe Biden, Tim Kaine, Elizabeth Warren, Al Gore…) coming to Virginia (and other states) to campaign for some of these Democratic House “wave” candidates.