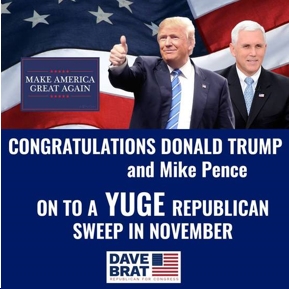 More and more Republicans are leaping off the out-of-control Trump train as it rolls down its disintegrating set of tracks. Blatant misogyny, as well as open references to and support for sexual assault appear to be the most recent reason for many Republicans’ decisions to draw the proverbial line in the sand and walk away from Trump’s apocalyptic campaign.

Yet there are still a handful of holdouts, like Dave Brat, the 2014 Eric Cantor-slayer and current congressional representative to Virginia’s 7th district, an area that encompasses parts of Richmond and Culpepper.

In many ways, Dave Brat’s continued support for Trump is confusing for both conservatives and liberals. Brat holds a PhD in economics and a Masters of Divinity from Princeton Theological Seminary. Prior to unseating Eric Cantor, Brat taught economics at a small Virginia college. On the surface, he seems like he’d be a reasonable and well-educated guy. And, having spent much of his career touting “Christian Values” one would think that Brat would’ve been one of the first to disavow Trump, as the wildly out-of-control Republican presidential candidate spewed hatred and/or mocked every single group and individual he could, from the disabled and Mexicans to women and honored veterans and prisoners of war.

With recent news events surfacing that suggest that Donald Trump is merely doing the bidding of puppet master Putin and his Russian hacker henchmen, one would truly believe that a congressional representative like Dave Brat—“Freedom” Caucus devotee and so-called super hero to the U.S. Constitution—would run screaming in terror from the Trump-Putin 2016 Campaign.

Yet, Dave Brat stubbornly clings to Donald Trump. Why?

Could it be that Dave Brat himself is more than just fan of vodka? Is it possible that Brat is a supporter of Putin and his own special form of autocracy?

Does Brat/Trump Support the Oppression of Free Speech?

Putin’s Russia is one in which a key freedom that Americans hold dear—the freedom of speech—has been brutally suppressed. In Putin’s Russia the best a dissenter can hope for is jail. However, Putin has also resorted to killing dozens of journalists, and even arresting opposition bloggers. Both local and foreign journalists or members of the general population that criticize the Russian government are harassed and intimidated.

Does Brat/Trump Believe in Corruption?

On the Corruption Index, Russia ranks an abysmal 127th out of 177. Bribes, vote-rigging, and the payment of extra cash to everyone from government employees to university officials to ensure an applicant’s admittance runs rampant. During the Sochi Olympics, it was estimated that between $20 and $30 BILLION disappeared due to embezzlement and kickbacks.

Hundreds of workers brought into Russia to help construct venues for the Sochi Olympics were denied pay and expelled after the construction jobs were finished. Putin even went so far as to begin detaining workers who appeared “non-Slavic”. According to reports, thousands were taken into custody, while others were held against their will in appalling conditions, when no crime had been committed.

Does Brat/Trump Support the Bombing of Babies in Aleppo?

In their efforts to bolster support for Assad, the Russians have used a variety of heinous and disgusting weapons of war, including thermobaric or vacuum bombs (that suck the oxygen out of the air), and phosphorus bombs, as well as targeted hospitals, market places, buildings of worship, and most other supposedly ‘safe’ civilian zones.

As NATO and western countries have begun to challenge Putin on his war against the civilians in Syria, tensions have risen, to the extent that Russia has moved missiles capable of carrying nuclear weapons into Kalingrad, near the border with Poland and Lithuania.  Russian state TV host Dmitry Kiselyov (and chief Kremlin propagandist) has publicly stated “’Impudent behaviour’ towards Russia may have “nuclear” consequences.”

Dave Brat, You’re in Love with a Commie Goat. And it’s YUGE!

There is an old Russian proverb that loosely translates: Love is so cruel that you could even fall in love with a goat. (Любо́вь зла́, полю́бишь и козла́.) Well, Dave. It seems you’ve fallen in love with a goat. Hope you like borscht and gulags, because it is time that you say goodbye the the 7th and hello to Russia with love.

“The Great Regression”: “right now the arc of history is not,...

Del. Sally Hudson Explains “what *exactly* we mean when we say...