This past weekend Donald Trump came to Virginia Beach to rally supporters at Regent University.

When Trump arrived, he was met by a wall of brave local women, with whom I was proud to stand. Trump has used the concept of wall building to play on people’s fears, promote hatred, and legitimize the demonization of those who don’t look like him. Our Wall of Women stood in silent, peaceful contrast.

Our “wall” consisted of women clad in brick-patterned jumpsuits. The jumpsuits featured colored patches that highlighted some of Trump’s demeaning public comments about women. “Disgusting Animal”; “Nasty Woman”; “Dog”; “Bimbo”:  These and other hateful words have been used by Trump in public and professional settings to degrade women.

We were proud to create a wall against Trump and his hate-filled campaign.

Over the course of our demonstration, we received lots of waves and honks of approval by male and female passersby. One particularly polite young man smiled, nodded in approval, and tipped his baseball hat to us. A number of women pulled over their cars to thank us for speaking out. Some even offered to join in and pinned patches with Trump’s statements to their clothing, standing in solidarity with us throughout the event.

Unsurprisingly, some men who drove by shouted insulting comments or used their middle finger to express their opinions. We were completely unfazed. To us, it was just evidence of how important it was for us to be there, unwilling to be intimidated.

But there was something about my experience that actually did trouble and disturb me quite a bit, and it’s important that I share it too. So here’s what happened.

As an organizer of our Wall of Women demonstration, I arrived early. We could not actually see the rally from our location. And the main parking lot for the rally was on the opposite side of campus from our demonstration spot, so I never saw most of the rally attendees. That said, some of them did park in a lot behind us, and I watched curiously as they made their way to the event. Aside from the demographic similarity of those I saw entering the rally (all white and overwhelmingly male), there was nothing particularly unusual about the appearance or demeanor of the Trump supporters I witnessed approaching the rally spot.  On a typical day, I likely wouldn’t have noticed them at all (though I might have noticed their bumper stickers, like the one on the car beside mine that read “Hillary for Prison”).

But here’s the really ugly part: When these same average looking men emerged from the rally, their body and demeanor had markedly changed. There was a clear and profound increase in their level of hostility and aggression. Their fists were clenched.  Their jaws were locked. Their chins jutted out. Their bodies lunged forward as if they were spoiling for a fight. The best way I can describe it is that these men looked like they had gotten a massive dose of steroids. But these were not men on steroids. These were men pumped on Trump.

Although there were police nearby throughout the day, I was glad that I had scheduled our demonstration to end before the rally let out, so most of the women had already left. One obviously angry man started in my direction to say who knows what, but I continued packing up and walked towards my car. He didn’t follow.  Soon another man swerved his vehicle close to where my fellow organizer and I were packing up, trying to intimidate us and pick a fight. He yelled that Hillary “said in the debate” that she supported “aborting babies the day before they were born,” one of many lies that is being promoted by Trump supporters. We were not intimidated, but we were disgusted.

I had an idea of what must have been going on inside the rally to have impacted the men I saw in this way. But I was shocked, and yet on the other hand I wasn’t, when I saw this particularly violent image from the rally. 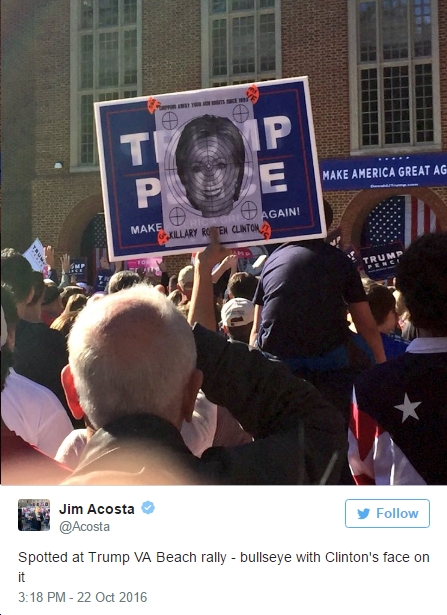 It’s clear what we are facing in this election. It’s hard to believe, and yet it’s real.

When future generations of Americans look back at this period in our nation’s history, there is no doubt they will do so with a mixture of shame and disbelief. Historians will study and write about Trump’s hate and lie-filled rallies, as they are a phenomenon which, thankfully, is unlike anything we’ve seen in modern presidential politics.

But future Americans will also be grateful. Grateful to the millions of voters, a majority of whom are women, who are coming out and will continue to come out to reject the bully Donald Trump and his politics of hate and violence. In battleground states where early voting has started, women are already voting in record numbers, creating a nationwide Wall of Women to block Trump’s candidacy.

Join our vast and growing wall of voters against Donald Trump and recall with pride that you stood up for what you knew to be right when it really counted. Join Hillary Clinton’s campaign if you can. Speak out whenever you are safely able. But above all… VOTE.

Thank you to West Potomac HS's (@theWPboard) Robert Rigby for reminding us of the record of this candidate against @ireneshintweets - hate has no place in Virginia
@EqualityVA https://twitter.com/bluevirginia/status/1421824572257624067

Vicious anti-trans rhetoric from the same person (the Republican nominee for VA House of Delegates vs. Dem @ireneshintweets) who compared being a conservative in the Fairfax County public schools to being a Jew in Nazi Germany. https://bluevirginia.us/2021/07/greater-washington-jewish-community-dismayed-by-two-va-gop-house-of-delegates-candidates-making-offensive-remarks-minimizing-the-holocaust#comment-5477833944 h/t @RobertRigbyJr1