I always knew I was different. Even on Election Day in 1968, I was the only kindergartner to chant “Humphrey” when all of my classmates cheered “Nixon.” While Humphrey was someone I heard about from my mom, I wasn’t afraid to stand out in a crowd.

That confidence helped me come out and eventually become an openly gay Virginia state legislator.

Getting here wasn’t easy, but the support I had along the way and continue to have both professionally and personally has made being gay in the Virginia General Assembly an incredible opportunity.

Early in my tenure, the Assembly went through one of its most anti-gay sessions ever. I remember getting knots in my stomach watching some of the votes and listening to the vitriol said on the House floor. At the end of the day though I knew, and I still know, that when speeches like that happen, I can grab the microphone and demand my voice — our voice — be part of the conversation. 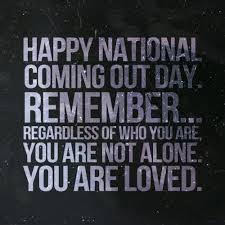 Near the end of that first legislative session a young House page approached me to say she appreciated my speaking at the upcoming Passing the Torch Dinner. At the time, I didn’t know it was an event hosted by the Gay, Lesbian & Straight Education Network for students from Gay-Straight Alliances. When speaking at the dinner a few weeks later, I looked out in the audience and saw that same page.

I realized I had helped give hope to a lesbian high school student — a young woman who sat on the floor of the General Assembly and had to listen to this same anti-gay hate speech during session.

I am proud to have been a voice for this young woman back in 2004 and am proud of my record of speaking up and speaking out for Virginia’s LGBT community.

On this National Coming Out Day let us honor those who’ve fought so long for equality and justice. I am proud of the work they’ve done and do every day and marriage equality would not be the law of the land without them. But that does not mean we can stop fighting for those who are afraid to speak up — and all those who haven’t yet come out.

We also cannot forget that while you can now get married on Sunday, in Virginia you can still be fired on Monday morning and evicted on Tuesday, simply because of who you love.

I am committed to fighting for laws that enact workplace and other non-discrimination protections. We must ensure that people, no matter their sexual orientation, can live, work, and love equally in our society.

Please join me in continuing to speak out for LGBT equality, for immigrants, for women, and for religious minorities. I have absolutely no intention of stopping now, and I hope you don’t either!

Thank you for all that you do,