Here’s what others have said.

“A Central Virginian for nearly 20 years, Eileen Bedell knows Virginians want someone to represent them in Congress who has the proven ability to bring people together to fix the critical challenges facing our country. Eileen will work to end the gridlock in Congress and make government more efficient, so I am pleased to endorse Eileen Bedell for Congress.” 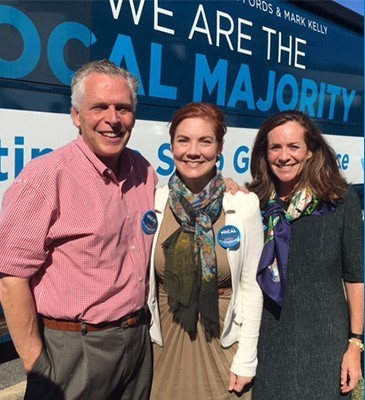 “Eileen Bedell knows working families want someone to represent them in Congress who has the proven ability to work with those who disagree with her to fix the difficult problems our nation faces. Eileen will wok to end the gridlock in Congress and make government more efficient. I am more than please to endorse Eileen Bedell for Congress.”

“Eileen is a strong, successful, principled Virginian who will help move Virginia forward. She is focused on education, bringing skills to jobs, and access to quality, affordable healthcare. Democrats have a chance to win with 7th district this November and get Congress working again, and that’s why I’m proud to support Eileen Bedell in this race.”

“Eileen Bedell represents the kind of responsible leadership Virginia’s 7th district needs and deserves in Washington. I am proud to support and endorse Eileen because she understands, as both a mother and small business owner, that moving Virginia forward takes representatives in Congress who will work together to strengthen our economy and keep our Commonwealth a safe place for Virginia families to live and work. We can’t afford any more of the divisive, ideological politics that gridlocks Washington.”

Meanwhile, Dave Brat and Donald Trump are involved in a wonderful bromance. It’s kind of sweet, in a sad kind of way, actually. Since they are pretty much on their own these days.

Vote for someone that other people (besides Donald Trump) believe in.

And if you aren’t in the VA-07 Congressional district, please consider chipping in and help get rid of a man who is way too close to white supremacists, a man whose defeat would send a powerful message that the politics of ideologues and demagogues are no longer tolerated, and a man whose only discernible purpose in Congress is, on the one hand, to do nothing related to legislation and, on the other hand, to disrupt the system, making it even more inefficient and ineffective.

Dave Brat is bad for Virginia, he is bad for America, and he must go. Please contribute. Eileen is within the margin of error and the momentum is real.