Cross posted from the Huffington Post with permission from (Arlington-based clean energy communications firm) Tigercomm President Mike Casey. Note that I have consulted to Tigercomm on clean energy and social media since 2010.

Read the “big takeaways” sections of the political news aggregators in the days following the elections. They’re focused on how campaign insiders missed this voter sentiment or that election dynamic. But they’re nearly silent on the Clinton campaign’s most obvious failing: After a decade pursuing the presidency, this highly accomplished woman couldn’t communicate to Americans a compelling vision of what she’d do for them.

Secretary Clinton was quite possibly the most highly qualified candidate ever to run for President. She had skilled campaign operatives and advisors who devoted themselves to building a large, tactically efficient national campaign operation. She had plenty of detailed proposals, lists and fact checks. It’s just that she had no message that spoke to Americans’ deeply felt economic vulnerability

Donald Trump, on the other hand, had one. “Make America Great Again” was simple, clear and consistent. It connected, and it helped compensate for a disqualifying track record, a series of gaffes and what was seen by GOP operatives as the worst-run presidential campaign in modern history.

How could Secretary Clinton spend a billion dollars losing to someone who often seemed to dance on the brink of political self-destruction? Consider this: 40 days out from Election Day, I spoke with four friends who were serving as paid communicators for the Secretary’s campaign. None could identify her “value proposition,” as we call it in businesses marketing.

Her staff was reported to have considered 83 different campaign slogans before settling on “Stronger Together.” Secretary Clinton used her slogan just twice during more than 4.5 hours of nationally televised debates – with over 80 million people watching. A word cloud of the Secretary’s last 20 campaign speeches (below) has the word “Trump” significantly bigger than “together.” The word “stronger” doesn’t even show up. 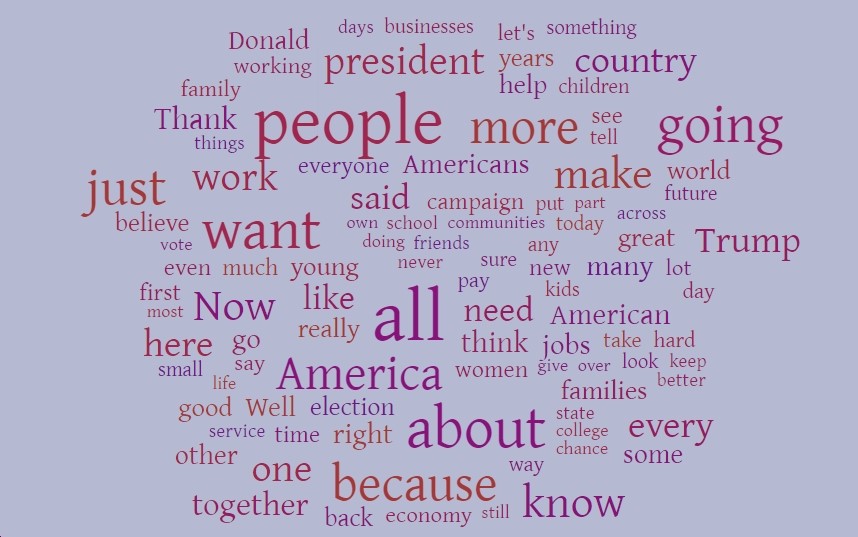 No one’s served by denigrating the Secretary or her campaign staff who worked long and hard to win. But neither is anyone served by sugar coating the marketing reality. Trump was a historic candidate, a historically bad one. Secretary Clinton shouldn’t just have won, she should have won by at least 10 points and an Electoral College blowout.

A string of panels, forums and punditry will now perform the post-mortem. They’ll slice and dice the data, trends and tactics from a multi-billion-dollar campaign cycle. That’s all fine, but they should not walk over the marketing failure that fundamentally enabled this outcome. Secretary Clinton never delivered a compelling value proposition to voters who are deeply angry at what they see as Washington’s lobbyist-driven culture, insider deals and an economy rigged against them.

That avoidable mistake is the latest chapter in a long story established by losing presidential campaigns: Carter (re-elect), Mondale, Dukakis, Bush (re-elect), Dole, Gore, Kerry, McCain, Romney and Secretary Clinton. All lost. None had a compelling message they delivered with discipline. And 6 of 10 were Democrats.

Messaging matters. That’s why we remember Reagan’s “Morning in America,” Bill Clinton’ s “Bridge to the 21st Century,” and Barack Obama’s message of “Hope.” They’re memorable because they worked. And, they worked because they didn’t make the messaging mistakes diagnosed in entire books devoted to the tradition of the message-less Democrat (here and here).

While politics isn’t my line of work these days, I spent two decades working for and around candidates who ran for office without a compelling value proposition. Some squeaked by to a win, most did not. But that pattern of failure never seemed to deter others from running message-less, cycle after cycle.

In the next few weeks, the lightbulb of presidential ambition will begin flickering in the back of the heads of several dozen Democratic governors, senators and business people. They’ll nurse that ambition and begin to talk themselves into running.

Here’s some free advice from someone who used to advise candidates: Don’t do it. Don’t run unless you: 1) Spend time listening to average people tell you what they see as their problems. 2) Authentically commit yourself to solving their problems. 3) Build a campaign message that works on the next 10 people you meet in a supermarket checkout line. 4) Are willing to spend the next few years delivering that message with discipline, focus and compelling language.

Skip those steps, and you’ll just be another message-less politician, in search of contribution checks and applause. You’ll also be in tension with Americans’ growing demand for an authentic message that addresses their problems.

Running for office is no fun. So why do it if you don’t clear the message bar in the first place – especially when Democrats should be burying their long tradition of the message-less candidate?

Mike Casey worked for 10 years as a communicator for two Democratic presidential campaigns, the House, the Senate and the DCCC. He founded and runs the national cleantech PR firm, Tigercomm.