Yes, ladies and gentleman, this right-wing extremist (see Likely 2017 Virginia GOP Attorney General Nominee Clerked for Clarence Thomas; Is Rabidly Anti-LGBT, Anti-Choice for lots more on that) is the frontrunner – the other announced candidate, Chuck Smith, has 1/100th the money as Adams and basically no chance – in the race for the Virginia GOP’s 2017 Attorney General nomination to take on AG Mark Herring. Check out Adams’ Facebook post (below) praising Trump’s EPA nominee Scott Pruitt, the climate science denier and fossil fuel industry on-the-payroll puppet, and lying through his teeth about the mythical “serious harm” the EPA has inflicted on the American economy and the fictional “mounting regulatory scheme that has crippled entire industries” (note: this bull**** is called the Big Lie, and anyone who pushes it out is an extremist nutjob). 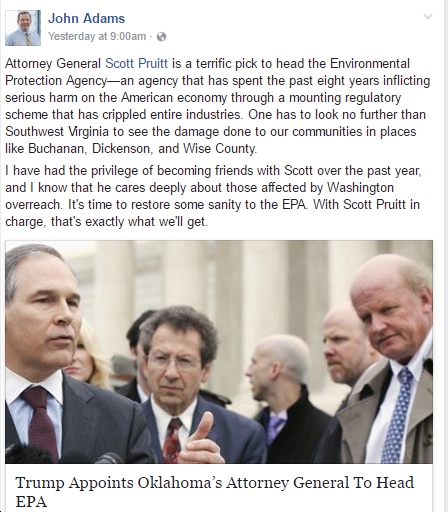 Meanwhile, in closely related news, the Trump administration has begun its McCarthy/Cooch-style witch hunt against climate science and clean energy, asking “for a list of Energy Department employees and contractors who attended United Nations climate meetings and worked on key Obama administration climate policies, including the social cost of carbon, according to a Bloomberg report.”

This is appalling, no matter what your “views” are on climate science (note: “views” in quotes because this is objective science, not a matter of opinion or “belief” or whatever). Basically, if you believe that our government – and citizens, for that matter – should be free from threats and intimidation by powerful political figures, then you should be highly disturbed by what you’re seeing here. John Adams, on the other hand, likely will be cheering on the witch hunt. Meanwhile, former President and Founding Father John Adams must be tossing around in his grave at the behavior of his namesake…

By the way, since there presumably will be numerous reporters at the Republican “Advance” this weekend, perhaps one or more of them might want to corner Adams and ask him a few questions:

The answers, or non-answers as the case may be, should be very revealing.

P.S. Also see Adams’ tweet, “Time to restore some sanity to the #EPA. With @AGScottPruitt in charge, that’s exactly what we’ll get. Great pick!” Really sick, extreme stuff from this guy. We had better make sure he gets nowhere near the Virginia AG’s office.