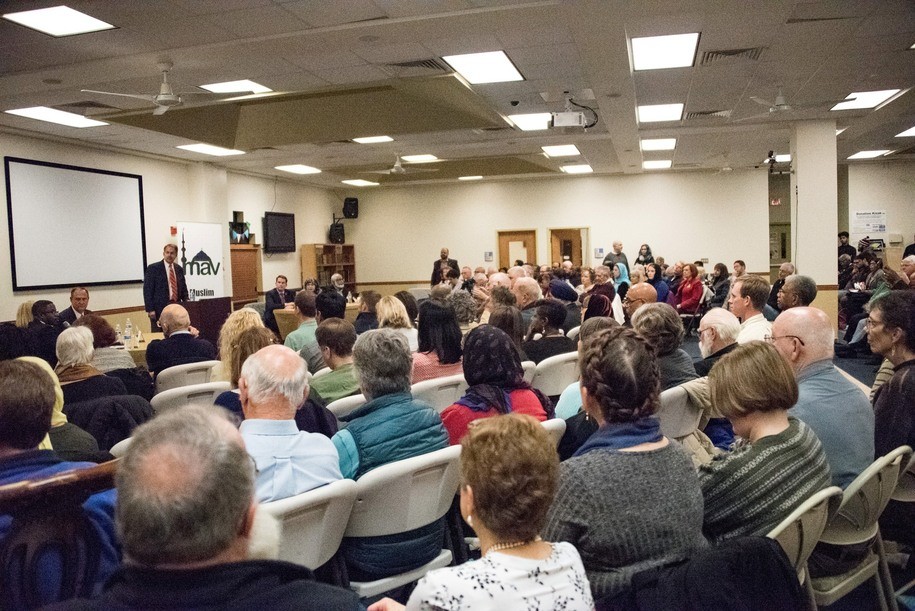 Wednesday night, the upstairs meeting room in the Dal Anor Community Center in Manassas was packed to capacity to attend a discussion on how Prince William County can come together and heal after a rather divisive General Election Season. The much-needed event was hosted by the Muslim Association of Virginia, InsideNoVa and the Prince William County Chamber of Commerce, and featured the following panelists:

Although the panel opened with several general statements about the state of the county as a whole, Mr. Ahmed boldly offered up statistics of the various hate crimes, attacks and other incidents that have occurred since November 8th, citing an article as the Huffington Post and other news sources have been tracking the uptick of such incidents. It was a sobering moment for everyone, as it began to accurately depict just what is going on throughout the county and what minority communities are facing. Reverend Brower and Ms. Paguaga echoed the unease that their respective communities are feeling, and a general worry about the future.

It was clear very early on that many of those in attendance were looking to the elected official present to affirm what they would do legislatively to protect their constituents and their civil liberties. Senator McPike offered a much more firm and sympathetic acknowledgment of what was going on in the community than Delegate Anderson, with McPike (unlike Anderson) able to mention at least one bill he was working on which would help improve the lives of those in the community in hopes of promoting harmony. Delegate Anderson, by contrast focused much more on the community itself, and only finally admitted to not having any real bills or plans for bills to address the issues brought up after multiple follow ups by the attendees.

Delegate Anderson at one point said that he doesn’t believe that we can “legislate harmony” within the community.

This is where my recounting of events ends and my commentary begins — I disagree with such an assessment.

While one cannot legislate in a way to force people to get along, it is entirely possible to create a type of environment — through laws — where prosperity is possible and inequality is nearly non-existent. Allowing all of our constituents a chance to achieve real progress in their lives means that they can take ownership of their situations, which definitely lowers the chance of the kinds of resentment and other negative emotions we’ve seen over the past few years. On top of that, putting in clear legislation which bans discriminatory practices and affirmatively protects the civil liberties of our fellow Virginians would go a long way in addressing the sense of unease among the different communities in the county.

This isn’t to say that the onus falls squarely upon the shoulders of our elected officials. Quite the contrary; I have already written at length elsewhere about the necessity of grassroots community organizing and mobilization in order for the broader community to engage in the political process and protect our fellow Virginians. It’s just that we still look to our elected officials to be leaders, and they need to have the courage to take bold action on their end to help us. Real change only comes when there is both pressure from the bottom and a willingness to act on that pressure from the top.

In my humble opinion, reinvigorating the Civil Rights Act and drafting up a Second Bill of Rights would be a good start. It’s time for us to actually be proactive about affirming our ideals of progress, solidarity and equality on top of playing defense against whatever may come.

As Senator McPike said, “we have to stand up and be vigilant with each step that does come up, and vote accordingly. We know we have real inequities across the system and we have to open our eyes to them and address them.”

That is the real cost of healing — forcing ourselves to acknowledge and address the inequalities in our system, and to engage everyone in how best to address those inequalities. That’s how progress is made.