by a 5th CD constituent of Rep. Tom Garrett’s

The February congressional recess is coming up and Republicans are worried about how they’ll defend Trump’s unconstitutional, pro-billionaire, anti-worker policies to their constituents back home. In order to avoid having to actually answer tough questions from the people he represents, Rep. Tom Garrett followed the orders of national Republican Party leaders and held a “virtual” Town Hall on Facebook, where he could strictly control what questions were asked.

The Facebook town hall was an attempt to avoid unexpected questions and control the narrative. But Garrett’s blatant attempt to evade accountability did not quite go according to plan… 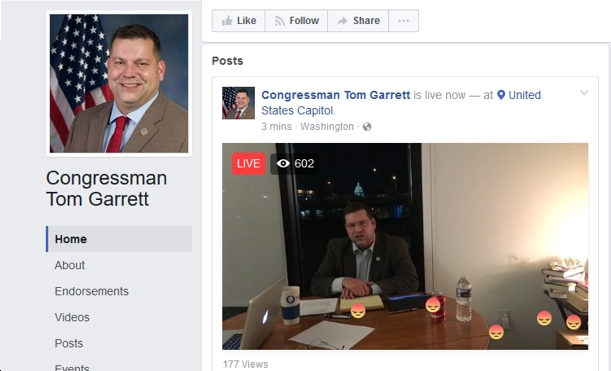 The live feed froze throughout the virtual “town hall” and Tom Garrett’s staff had to repeatedly stop and restart the video. People were forced out of the live feed and constituents, particularly in rural areas with spotty internet connections, weren’t able to follow Garrett’s statements or ask questions in the live feed’s comment section. People continually demanded an in-person town hall to make up for the Facebook event’s deficiencies, but Garrett wouldn’t even comment on their simple request. 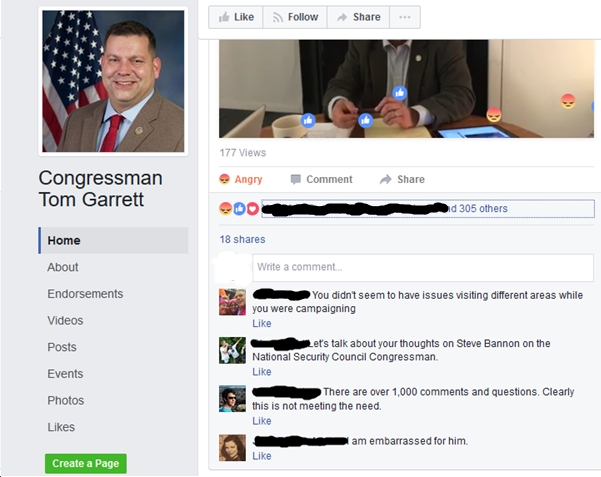 The Facebook event couldn’t really even be considered a town hall. It was more Tom Garrett reading pre-written statements into a camera. Constituents continually said that the Facebook event was insufficient and that they needed an in-person town hall where there could be an actual conversation between Tom Garrett and his constituents.  Garrett ultimately refused to hold such an event, saying of his events during the congressional recess that “most will be online” 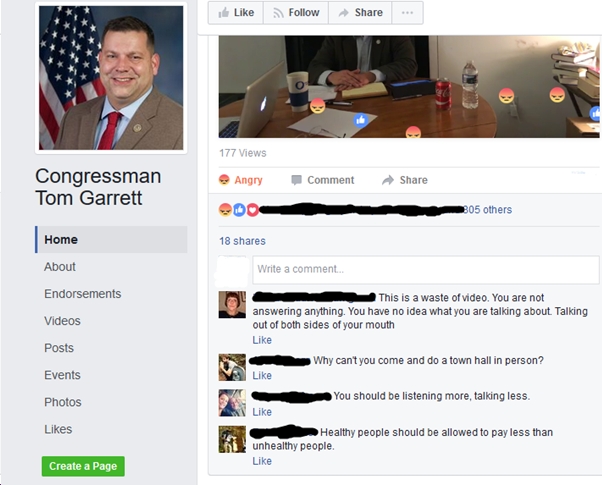 And what of the few policies Tom Garrett did actually talk about? Garrett came out against any increase of the minimum wage and effusively praised Trump’s anti-worker Cabinet picks. He refused to support tuition free public colleges and universities and expressed full-hearted support for the radical, anti-teacher agenda of Betsy DeVos. When asked about whether he supports defunding Planned Parenthood, Garrett only said, “we passed the bill, and I have no regrets.” Never mind that this means women will have less access to quality healthcare throughout Virginia’s 5th district.

During his 2016 campaign Garrett pledged to take on the establishment and fight for working families in the 5th district, but he’s already sold out to the Republican establishment. Garrett’s fully committed himself to blindly following the radical agenda of Trump’s billionaire cabinet and Republican Party national leadership. 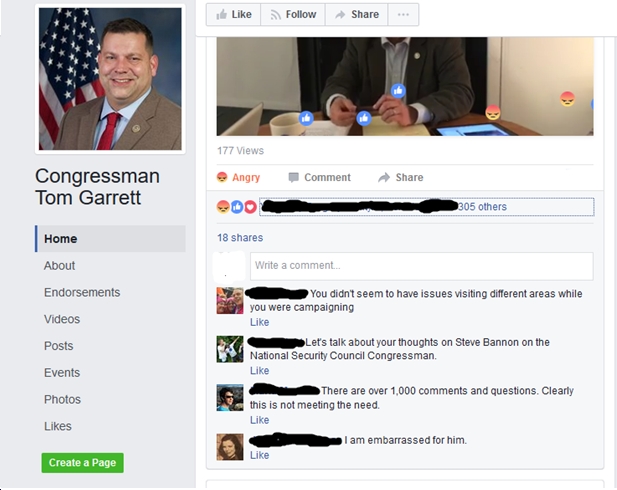 The reviews are in. The vast majority of constituents are angry about Tom Garrett’s botched Facebook event. As constituents of the 5th district, we are Tom Garrett’s employers. It’s time for a performance review, and cowardly virtual events where Garrett reads pre-written statements to a silent audience that can’t even watch the video without the live feed freezing up just doesn’t cut it. At a bare minimum, Tom Garrett needs to pledge to meet in-person with his constituents at a town hall during the February recess. Otherwise he’ll be fired in 2018 for being missing on the job.