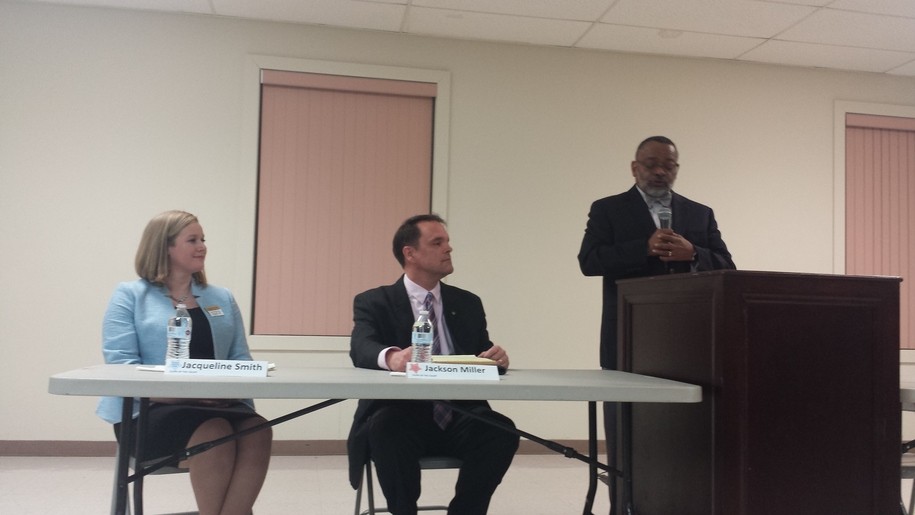 I recently wrote about the Prince William Clerk of the Circuit Court Special Election and fellow Kos contributor pdxbuckeye published an excellent diary about the data behind it. For those of you who are just tuning into the Virginia elections this year, the clerk’s race is one to watch, and I recommend reading those diaries for context of this one. Jacqueline Smith is taking on Jackson Miller for this position.

Tonight, the Prince William Chapter of the NAACP (which I am a part) hosted a forum for the public to meet the candidates and ask them questions about the role of the clerk and what they would bring to that role. As the NAACP hosted the event, they urged the questions and answers to focus on the criminal justice and economic challenges the African American community faces in Prince William County, Manassas City and Manassas Park and how the office of the Clerk of the Court can support those communities.

In past years, local races like this would garner very little attention, but this year…

Elected officials at the local and state level were present (from both parties) and the organizers had to keep getting more and more chairs as the event got started. Questions were submitted both in advance and at the event; these weren’t softball questions, either. One question was aimed at having the candidates address the fact that Virginia has one of the lowest felony larceny thresholds in the nation (at just $200) while another asked the candidates how they are going to ensure that the court’s services are available to people of all backgrounds and means.

Partisanship aside, I believe that any reasonable observer would conclude that Jacqueline Smith has a much deeper relationship with the office she wishes to lead; as a lawyer who has interacted with the Clerk’s office for nearly two decades, she has met with the folks who work there, worked with the administrators there, and even advocated for the Board of County Supervisors to raise funding for its neglected operations. Her answers relayed specific issues, real solutions, and anecdotal evidence to back them up. In short, she has been involved in every aspect of the office already, and would bring those experiences and her own skills as both a lawyer and business owner to the table.

Jackson Miller, on the other hand, gave quite vague answers and ended up agreeing with Jackie for most of the night. He attempted to leverage his experience in the military and as a state legislator as his qualifications for the role; however, it was clear that he did not have nearly the depth of knowledge of the workings of the Clerk’s office, or the experience of the folks who work there.

To Miller’s credit, he had apparently been engaged in an event before hand, and faced a largely unfriendly crowd to his side of the aisle. At the same time, he spent most of his opening remarks bragging about the various titles he’s held as opposed to linking those accolades to the work he would be doing in any substantive way. Based on the audiences reactions to both candidates, Miller did not win anyone over, and those on the fence largely favored Jackie by the end of the night.

Overall, it was a great event, and the Prince William NAACP deserves major kudos for hosting it; both candidates deserve credit for their participation and civil discourse; and the public deserves recognition for showing up and for submitting real questions for the candidates to answer.

I’m all in for Jackie Smith, and I hope all of you are, too!

The Special Election is on April 18th.