When Cheryl Myers Johnson contacted Senator Tim Kaine’s office to request a meeting with a staff person to discuss healthcare reform, she was not expecting the Senator himself to end up listening to our stories for over two hours. The senator gave about a 15-minute recap of where the federal government is in the reform process and then intently listened for the remaining hour and 45 minutes to personal stories from the group of approximately 30 people.

Senator Kaine began by stating, “My first four years in the Senate I had been on Armed Services, Foreign Relations, and Budget — which are great committees — but I always wanted to be on Health, too, and my consolation prize for being on a losing national ticket was they said, “Okay, we’ll let you on the Health committee.” He went on to say that while the committee has a broad focus on higher education, pension reform, and labor rules — the main focus the next two years will be on the Affordable Care Act. Kaine has been spending time at hospitals, free clinics, and meeting with groups of concerned citizens like those gathered in the meeting room of the Midlothian Library to talk about “what’s good, what’s bad, and how can we make it better.” 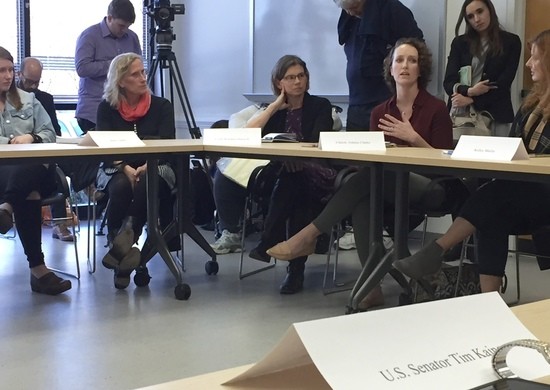 Clarke tells of her struggle through her diagnosis

One young mother, Chnoic Adams Clarke, shared her story about being diagnosed with the most aggressive form of breast cancer at the age of 33. “It was a shock. For the first time in my adult life, those ACA provisions would be more than hypothetical. They would not only allow for doctors and treatments to save my life but also for our finances and family to remain stable and secure. I have two years of frequent doctor visits, six months of multiple forms of chemo, multiple surgeries, radiation, physical therapy, etc. behind me. When I look at what those costs were, the mere mention of a HSA as a viable option only proves a complete lack of realistic understanding. And the concept of a high risk pool is just plain insulting.”

Senator Kaine said that it’s unacceptable that “we should have to tolerate a reality where 750,000 people are going bankrupt every year because of medical bills.” He calls himself a realist and knows the ACA could be improved, but states that “repeal straight-out would be an absolute disaster.” A flat repeal would likely cause 30 million people to lose health insurance — a figure that Kaine points out is the combined population of 19 states. Fifty million US citizens have pre-existing conditions and if the ACA is repealed it would mean women could be charged a higher premium than men based solely on their gender.

Another aspect of the Affordable Care Act that attendees mentioned was the Mental Health Parity Provision. Maureen Hains told of her inability to receive adequate care before the ACA. She struggles with Bipolar Disorder, which she has been able to manage with proper care and prescriptions. One hospital stay prior to the ACA cost her upwards of $10,000, forcing her to move back in with her parents and commute over an hour to work to pay down her debt. A similar hospital stay while covered under the ACA cost only $900. “This was far more manageable, and I received the care I needed and the medication management under supervised care that was absolutely necessary for me to get back on my feet. The Affordable Care Act doesn’t just save lives, it saves money, because without it I would be on assistance. I would feel like a burden. [It] is not perfect, but things like the mental health parity provision work.”

Kaine said that since the new Congress began January 3, the attitudes have shifted considerably. “So we went from repeal and nothing, to repeal and replace down the road, to repeal and I guess we better have a replacement at the same time as a repeal, to now we’re in this phase of, okay if we’re going to replace what’s the replacement going to be.” He went on to say that “people power has moved this debate significantly.”

When Katie Tyson’s young son was diagnosed with cancer — “In the span of one week, my son went from being a healthy 4 year-old with no more than a set of ear tubes and scheduled well-child check-ups to his name, to being completely dependent upon the healthcare system for his life.” Tyson, an OBGYN, took time off to care for her son and when complications arose in his treatment, her leave of absence became a lost job, along with her family’s health insurance. She estimates that in the first year of the 39-month treatment protocol, they spent $350,000 out of pocket.

Senator Kaine says they are working toward a plan in the House, although it’s everyone’s guess as to the final plan they will present the Senate. One House member told Kaine that they have a lot of plans — “they just need one that more than 3 people will agree on.” The Senate Republicans can repeal certain budgetary aspects of the ACA with only 51 votes but will need 60 votes to repeal parts of the ACA like the pre-existing conditions clause. For that, they would need votes from Democrats in the Senate, too.

Kaine, along with 13 other Democratic Senators, drafted a letter to the Republican leadership on healthcare — Mitch McConnell, Orrin Hatch (Chairman of Finance), and Lamar Alexander (Chairman of Health, Education, Labor, and Pensions). Kaine said the letter basically declared: “ You guys want to come up with a replacement for the Affordable Care Act. We are very willing to reform or repair the ACA. I don’t care whether you call it a replacement, if you don’t care whether I call it a repair. The key is we want to try and improve it.”  One idea Kaine said he had to improve the current ACA, was to allow the federal government to negotiate pricing with pharmaceutical companies to lower prescription drug costs to consumers.

Katy Nowlin, a soon-to-be first-time mom, said, that with a disabled Veteran husband of the US Army and VA National Guard, she was not prepared for the high cost of prenatal visits — one office visit with the standard recommended tests would cost $3,634 without insurance. She said that without the ACA she would be “faced with the decision whether to skimp on medical care, placing my baby’s or my own health at risk, or become buried in debt. This should not be a decision people should have to make.”

Tyson, who advocates for the most vulnerable patients, attended a similar meeting that same morning with Congressman Dave Brat only miles from the afternoon meeting with Senator Kaine. She mentioned how much she appreciated Kaine’s interest in her son’s story, and compared the two party’s viewpoints: “When I listen to the rhetoric around the ACA, and despite my decades of experience with other people’s loved ones in my professional capacity as a physician, I cannot help but ultimately hear it through the filter of my family’s recent experiences. My son is not a ‘worst case scenario,’ ‘burden,’ ‘statistic,’ ‘disaster,’ or ‘drain.’ Who he is, is a precious child. And what he is, is an example of the kind of vulnerable yet valuable member of America who needs to be protected.”

Senator Kaine said he hoped to take some of the personal stories of how the Affordable Care Act affected our community to the Senate floor. Recently he read 20 such stories that Virginians shared through his website. Stories, that like, Clarke’s mean life and death. In a world where health insurance plays a large role in the quality of a family’s life, it is something she thinks about every day. “I think about how lucky I am to have what I do; how in a Republican world of no ACA, my life could be completely different right now. My daughter has a 50% chance of inheriting my faulty gene and I worry about what that will mean for her. Frankly, it’s terrifying.”

Video: Senator Mark Warner Argues “there is no doubt at all that our tax system does not rank…on the more progressive side”