First, here’s Del. Mark Levine explaining (on crazy Fox “News” no less) how absurd it is “to blame millions of [peaceful, law-abiding people for the [criminal] actions of one or two” or “to fulminate against all ‘illegals’ because one of them committed a terrible crime.” That, Del. Levine explains, is the very “nature of prejudice.” Del. Levine further explains the obvious, that “the best way to catch criminals is to treat everyone with respect so that people come forward and can be witnesses for those crimes.”

Now, here’s Virginia GOP Lt. Governor candidate Bryce Reeves doing EXACTLY what Mark Levine said you should NOT do. Also being a raving bigot, xenophobe, demagogue, etc., something he clearly feels will appeal to the Virginia Republican “base” electorate. And that is really the scariest part of this, that there are actually people out there who find this bigotry and idiocy appealing. Scary. 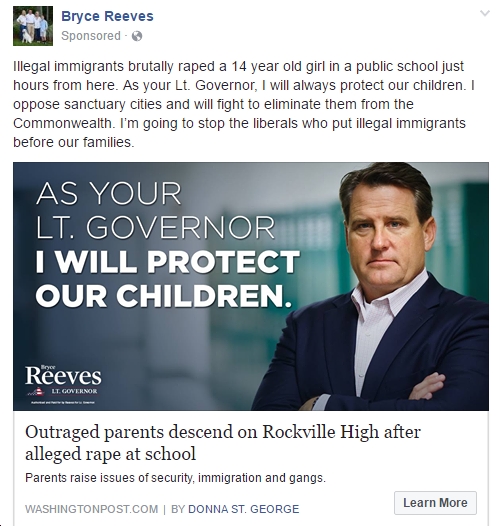