How do Republican activists enjoy themselves when they get together for their annual dinners? Well, in the 6th CD, home of our pal Bob BADlatte, they celebrated last night by listening for 30 minutes to “adulterous felon and disgraced academic Dinesh D’Souza.

A few highlights from D’Souza’s illustrious career include: claiming insanely that “the cultural left in this country is responsible for causing 9/11”; arguing also insanely “that the problem with Africa is not that it was colonized, but rather that it was not colonized long enough”; arguing (also insanely) that the 9/11 terrorists were the true “warriors” while “We have been the cowards. Lobbing cruise missiles from two thousand miles away.”; arguing (also insanely – sensing a pattern here?) that “American conservatives should join the Muslims and others in condemning the global moral degeneracy that is produced by liberal values”; writing about President Obama that “Incredibly, the U.S. is being ruled according to the dreams of a Luo tribesman of the 1950s. This philandering, inebriated African socialist, who raged against the world for denying him the realization of his anticolonial ambitions, is now setting the nation’s agenda through the reincarnation of his dreams in his son.”; “plead[ing] guilty to one felony count of making illegal contributions in the names of others”; etc. 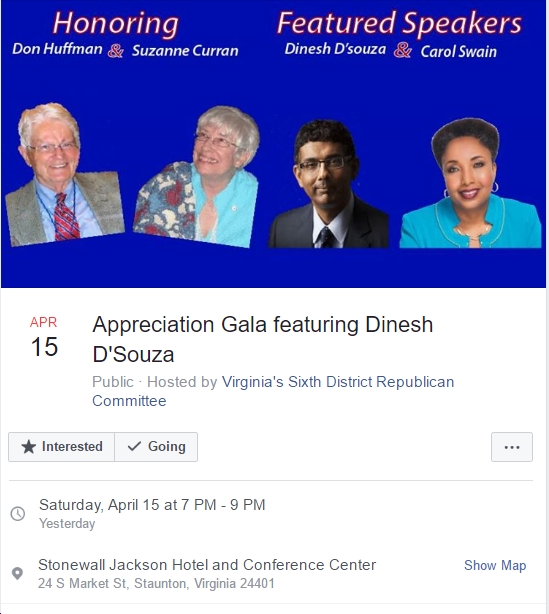 Not surprisingly, neo-Confederate, xenophobic bigot and demagogue Corey Stewart shared the video  of D’Souza’s unhinged speech last night on his Facebook page. Here are a few “highlights” from what D’Souza had to say (note the loud laughter from the crowd at D’Souza’s crude “joke” about Hillary Clinton).

Here, the crowd thinks D’Souza’s crazed, misogynistic line about how the media worked to “drag that crooked hag [Hillary Clinton] across the finish line” is uproariously hilarious.

Here, D’Souza jokes (???) that “most people after watching a movie just about Hillary would want to put a bullet through their head.” Demented.

Here, D’Souza claims that Democrats are the party of racism, slavery, segregation, the KKK, etc, while Republicans are the ones who fought all that. D’Souza claims that Democrats have “taken all the bad stuff that THEY did and blamed it on the South, the white man and America.” D’Souza further claims that Democrats did the bad stuff “and we stopped them.” He says “there’s nothing wrong with state’s rights,” but Democrats “polluted the issue.” Also, “there’s nothing wrong with the Confederate flag, but the Democratic Party defiled the Confederate flag by inventing…a doctrine of slavery attached to it that was actually not unique to the South,” and that the real debate on slavery was between the “anti-slavery Republican Party and the pro-slavery Democratic Party.” Of course, D’Souza completely warps and distorts the history of our nation, but whatever, details details.

Finally, this clip is presented an example par excellence of right wingers always claiming to be the victims, never doing anything wrong, and also having ZERO self awareness. In this clip, D’souza claims that Republicans would never “boycott Obama’s inauguration” or leave nasty comments on Nancy Pelosi’s Twitter feed. According to D’Souza, “we don’t even think about [doing something like that].” Of course, if you check out Nancy Pelosi’s Twitter feed, in about 2 minutes you’ll see this is wildly false. You can also check out a million other sources to see the reams of misogyny and other hate directed by the right wing at Nancy Pelosi and other Democratic women (and African Americans, etc.). But no, they’d never “even think about it.” My god…

There’s much MUCH more lunacy here, including a discussion (natch!) of Nazism and Fascism as fundamentally of the left, blah blah blah. But mostly, it’s all about how the political right can do no wrong, and the how Democrats/liberals/progressives/etc. can do no right, yet victimize the poor political right with their diabolical schemes, domination of the media and academia, yada yada. Check it out, if you have the stomach for this whining idiocy/ignorance and hatefest, below. Oh, and one final question: do Ed Gillespie and the Virginia GOP approve of Dinesh D’Souza and his deranged, hateful, bigoted rhetoric? Clearly the 6th CD GOP does, but what about the rest of the Virginia GOP?