Corey Stewart also says that Ed Gillespie was wrong to (very weakly, I’d add) condemn white supremacists in Charlottesville, Virginia and is supposedly “playing right into [the Democrats’] hands. Stewart lies through his teeth that Democrats are the “party of racism” and asks why “the two clowns running for governor on the Democratic side” Tom Perriello and Ralph Northam haven’t condemned “overt racist” (Charlottesville City Council member) Wes Bellamy. On the first point, that Stewart supposedly doesn’t know any white supremacists, check out this post at Tea Party blog The Bull Elephant, which demonstrates definitively that Corey Stewart DOES know white supremacists – a bunch of them. [NOTE: continued below the video]

On the second party, I agree that Democratic Party back in the 1920s, 1930s, 1940s, 1950s had many racists in it, but that almost completely flipped starting in the 1960s, when the “Dixiecrats” started flocking to the Republican Party and its racist “Southern strategy.” Today, Democrats aren’t perfect – no party is, of course – but we are clearly the party that fights AGAINST racism, xenophobia, bigotry of any kind, while the Republican Party embraces it at the highest levels, including the overt bigot in the White House.

Finally, regarding Charlottesville City Council member Wes Bellamy, there is no question that much of what he tweeted several years ago was deplorable – homophobic, misogynistic, racist, etc. But, as I noted here, “since then, by all accounts Bellamy has risen to become a leader in Charlottesville and – as you’ll hear in his own words – basically turned his life completely around.” Also, Bellamy issued a powerful apology for his past actions, one which “received a standing ovation from the large crowd present, and then statements of support by his Council colleagues.” But yeah, those are the right wing’s only “arguments,” that: a) Democrats are the real racists (LIE); and b) Wes Bellamy did some bad stuff several years ago (for which he’s since apologized, turned his life around, etc.).

Finally, check out (below; bolding added by me for emphasis) what Charlottesville Dem Lloyd Snook wrote on his Facebook page about the right wing trying to use Bellamy as an excuse for the white supremacists in their midst. Nailed it.

No one made the alt-right/Nazi revivalists/torch bearers do what they did.
Conservatives are trying to blame folks on the left for having stirred up the controversy that brought Spencer to town. That is emotionally easier than trying to draw (and maintain) a line between themselves and the wackos who agree with them. Folks involved in politics need to look carefully at their “friends” as well as at their enemies. 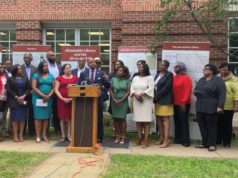