Yeah, I admit it, my confidence in the science – or is it an art? or is it a bad joke? – of polling has taken a serious hit in recent years.  For instance, in 2014, the polls wildly missed Mark Warner’s near-loss to Ed Gillespie (the Real Clear Politics average had Warner up 9.7 points). Then in the 2017 Virginia gubernatorial primaries, the public polls missed bigly yet again, with almost everyone (except for the brand-new Change Research) consistently showing showing Ed Gillespie up by 20 points or so and most public polls (other than PPP) showing the Democratic primary to be neck and neck, or with Tom Perriello holding a slight edge. That includes Quinnipiac Polling, whose last poll – albeit well before the election, back in April – had Gillespie up 16 points over Corey Stewart and Tom Perriello up 5 points over Ralph Northam. Neither was even close. And yes, I’m well aware that stuff changed between April and June, but still…really?

With that vote of (no) confidence, here are highlights from Quinnipiac’s just-released Virginia general election poll: 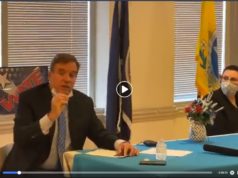 Sen. Warner Sends Letter to Postmaster General, Urges Him “in the strongest possible terms” to “reverse course,” “commit to strengthening and defending the Postal...

Governor Northam Statement on the Third Anniversary of Violence in Charlottesville https://bluevirginia.us/2020/08/3-years-ago-violence-descended-upon-charlottesville-bringing-terror-and-hate-to-our-commonwealth

Coal collapses (down 30% from 1H19 to 1H20) under Trump - haha, so much for that "promise!" https://bluevirginia.us/2020/08/wednesday-news-russias-reckless-and-foolish-vaccine-biden-picking-harris-is-a-statement-on-what-it-means-to-be-american-we-have-never-seen-a-nominee-like-kamala-harris-before-kama#comment-5027598901