From the Fairfax County Democratic Committee:

On August 29th, Fairfax County will hold a Special Election and we are working to elect Karen Keys-Gamarra to an at-large vacancy on the Fairfax County School Board.  Karen was endorsed by the Fairfax County Democrats on Friday, June 23rd.  Karen needs your vote and the vote of as many Democrats as we can inform of this obscure date for a Special Election. So that we don’t have to scale back our November election plans, we will need additional funds to deal with this unanticipated and unbudgeted expense, please consider contributing!

Karen has been an attorney advocate for children for years, and she received the Washington Post endorsement in her razor-thin loss for Sully District School Board in 2015. Her Republican opponent has no experience in school matters and would be a dangerous addition to the School Board.  The Post observed in his last run for office that he was lacking “any experience or qualification for the job.”  The paper characterized his “grasp of policy and politics” as “tissue-thin.”

Will you contribute to ensure that the Democrats take this seat?
FIND OUT THE CYNICAL WAY THIS SPECIAL ELECTION CAME ABOUT:
Three weeks ago, At-large School Board member Jeanette Hough resigned when her husband accepted an overseas job. Under pressure from the Republican establishment, she resigned just before a June 10th deadline which forced an August special election.  Had she waited a matter of days, the election to fill her seat would take place on Election Day in November at no significant additional cost.  The Republicans know that if they want any chance of winning this seat they must force a low turnout election when Democrats are less likely to vote.  This deliberate act of voter suppression will cost Fairfax County taxpayers approximately $250,000.
Hough did not even attempt to create a pretext of needing to resign when she did.  She attended the June School Board meeting as a private citizen, unable to represent her constituents because she had resigned.  Then, on June 20th, she had a front row seat when the Fairfax County Republicans met to endorse her replacement (see photo). 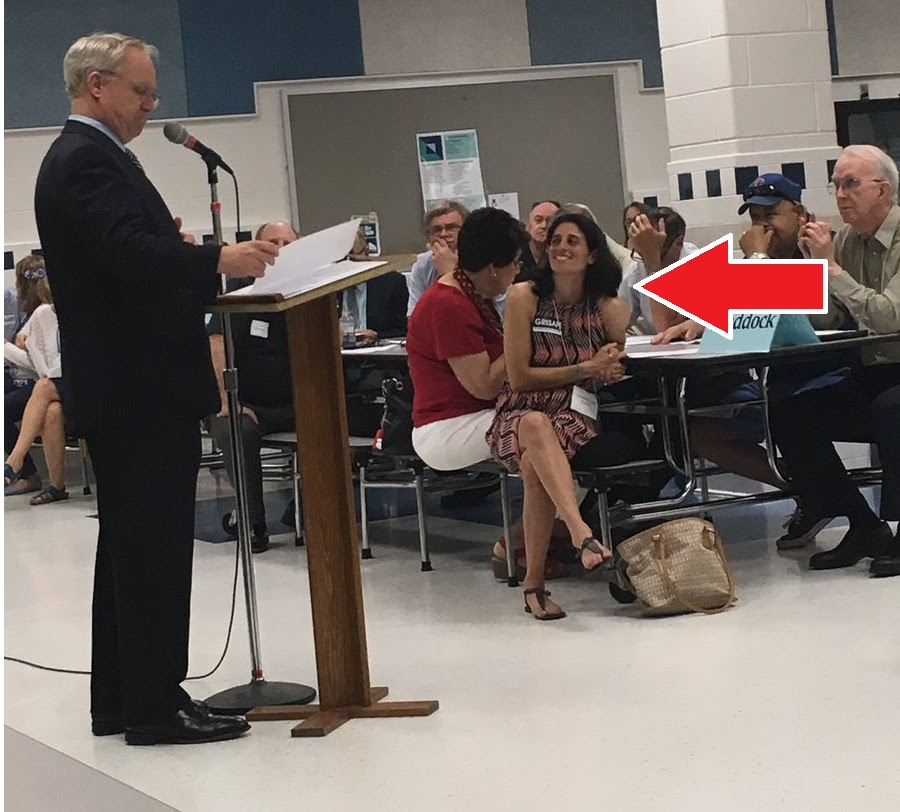 VOTING INFORMATION FOR SPECIAL ELECTION:
Vote at your regular polling place August 29th from 6:00am-7:00pm, or you can vote before the special election.
Click here for absentee voting info from the Fairfax County Office of Elections