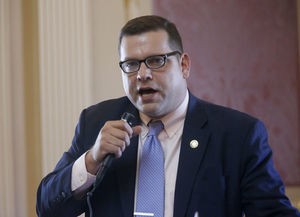 Yesterday, in the wake of the shooting in Alexandria, my congressman (Rep. Tom Garrett) went on a sort-of public meltdown on Twitter. In light of what happened, I can absolutely understand why he’d be upset- I know he’s friends with Congressman Scalise, and it was nothing short of a miracle that the results yesterday weren’t even more horrific than they were.

But instead of doing what even the President managed to do yesterday- come together, to agree that we’re all one American family, and that violence is never an answer in our political system… he decided the answer, instead, was to go after the root of the problem.

Violent leftists. Yes, indeed, it’s folks on sites like here at DailyKos that are the problem. And it wasn’t just a passing comment in the heat of the moment… his tirade extended throughout the day, and continued into this morning, in fact. He did everything he could do to “prove” all the problems of vitriol and acrimony in our system were laid directly at the hands of “leftists”, in a fairly transparent attempt to avoid any culpability for his role in the diminishing of public discourse in our country.

I had enough of it. Leaders are supposed to do exactly that– lead. They set an example in dark times, they are the rock in the storm that steady us to go onward. It’s not supposed to be easy, particularly at times like this. But Mr. Garrett in particular seems to have been of the opinion that his Congressional seat was simply something owed to him; that any hard work it takes for him to do the things he’s supposed to do as a Congressman is unacceptable.

What’s more is that on Tuesday, while my race for the House of Delegates wasn’t on the ballot in Virginia, I spent the day visiting every polling place in my district, and our campaign had two-dozen volunteers spread across four counties. At two different places, our volunteers were threatened– and I was personally told by someone that Democrats were like bugs, and needed to be exterminated.

I wasn’t really in the mood to be lectured about “discourse”, or to hear that my volunteers– not local county party volunteers, which would be bad enough, but my volunteers, the almost two-dozen men and women who went out in the 90 degree heat in central Virginia all frickin’ day to stand up for a race that wasn’t even on the ballot until November– didn’t actually get threatened. Or, even if they did, meh; probably a joke, amirite?

So I took it to him. 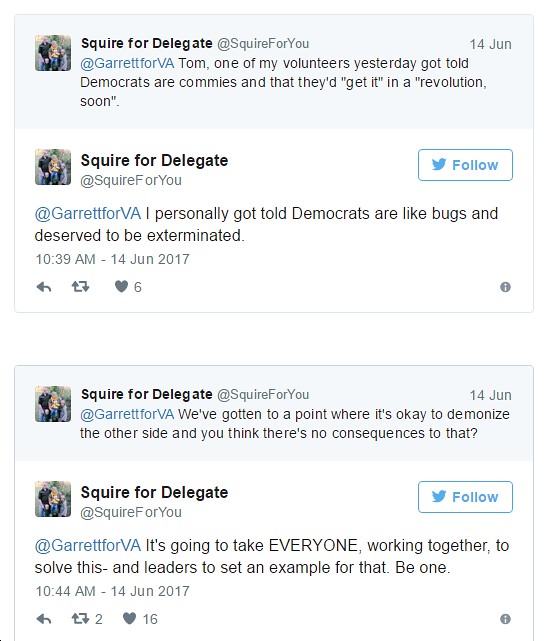 There’s plenty more; feel free to read the thread if you like. But predictably, while he read my tweets to him, he ignored responding to them, as he usually does. Like a lot of bullies, he only likes to go after folks on Twitter he think he can punch down at.

But I know he did read ‘em, because he took the time to ask his Chief of Staff to go after me once I told him if he wanted the job, he needed to be a leader. How dare I accuse the Congressman of not being a leader? Why, he’s got a great track record of leadership. 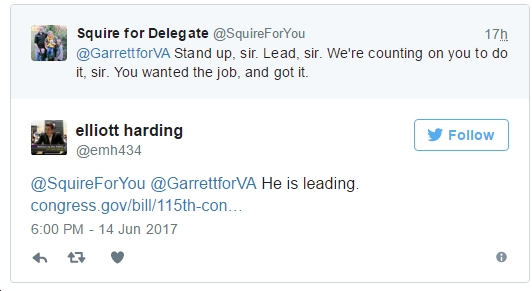 Yes, that’s right, folks– Congressman Garrett is leading the charge to fix the acrimonious nature of our political system… by making sure everyone in Washington, DC has a gun. Yes, that’s the best example of “leadership” my Congressman can point to.

I get it, Congressman Garrett- this is a tough situation. But you rode to power here in Virginia state politics largely on the Tea Party movement, that said Obama was evil, that Democrats were murderers, that anyone who didn’t agree with you were the enemy– not that you disagreed with their politics, not that we needed to find consensus– the enemy.

Now you’re in a position to fix that. And yes, it’s dangerous. Trust me, I know– I worry every single day about that. Keep in mind, I’m running for the House of Delegates in the Trump Winery district, against an incumbent so close to the Trump family he was invited to spend election eve with Ivanka in Northern Virginia. Remember back in December, when that union leader from Indiana, the Carrier guy, deigned to call Trump out on Twitter… and then Trump went after him personally. Guess what happened after that?

But the state of affairs we find our political system in today isn’t one our Republic can long abide. And if principled folks don’t stand up and charge headfirst to change that, now… I have real concerns about whether or not our Republic will survive it.

So if you want to be a leader, Congressman Garrett, you best suck it up and do everything in your power to fix it, instead of casting blame on Twitter. That’s exactly why I’m doing what I’m doing; why I’m running, even though my race is supposedly one of the toughest in the entire Commonwealth of Virginia. Because the time for inaction is over. We were complacent for far too long, and it’s going to take the blood, sweat, and tears of principled leaders of all stripes to stand up and bring us back from the precipice we find ourselves perched on. Now- not later, now.

Before it’s too late.

Kellen Squire is an emergency department nurse running for the Virginia House of Delegates in the 58th District this fall, the seat once held by Thomas Jefferson