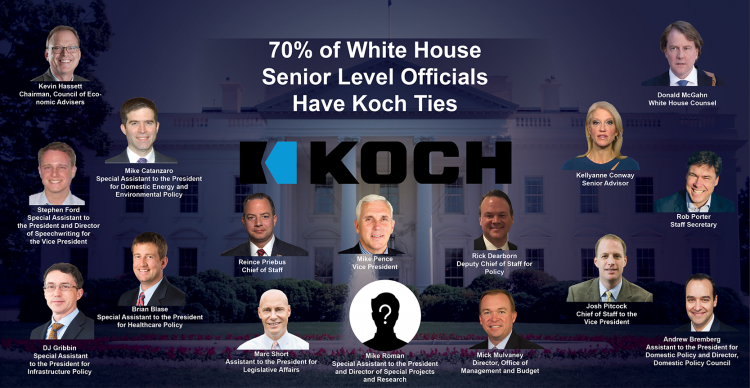 A forthcoming book by the Checks and Balances Project – “The Disrupted: The Definitive Investigation into Koch Self-interest, Infrastructure and Strategies to Control Government” – looks highly promising as the type of in-depth, investigative journalism the corporate media should be doing. Unfortunately, for a variety of reasons (e.g., the race for “clicks,” “eyeballs” and of course profits), the corporate media does far too little of this essential work. Which is where groups like the Checks and Balances Project (C&BP) come in, guaranteeing that somebody is looking into fossil fuel industry efforts to spread doubt and misinformation about climate science and, just as importantly, about climate solutions like clean energy. That includes, of course, the Koch brothers “deep ties to Vice President Mike Pence.”

While people are focused on President Trump, day-by-day, with little notice, the Koch Brothers are getting stronger. And their deep ties to Vice President Mike Pence are paying off.

David Koch has demonstrated his appreciation of Pence by giving him more money than to any other candidate. Today, Pence is one step away from becoming President of the United States. When he recommends individuals for major jobs in the Trump Administration, as he did consistently as the leader of the transition, and to this day in his role as Vice President, Pence guides implementation of the Koch agenda.

C&BP has assembled from a variety of sources and our own original research a list of 16 high-ranking officials in the White House with ties to the Kochs.

Disturbing stuff, at least if you care about honest government that serves the people – not the polluters. Unfortunately, as much as the Trump folks like to talk about “draining the swamp,” in fact they are doing the exact opposite as we speak — undermining transparency and the rule of law, putting the foxes in charge of guarding the proverbial chicken coop, all with the goals of enriching the rich and empowering the powerful.

As C&BP detail, the chief villains in this sordid tale are the Koch brothers and their network, which “finances and conducts an expansive effort to resist government incentives for clean energy technologies, and to fight pollution taxation that threatens to compromise Koch Industries’ bottom-line.”  How much dirty money are we talking about? According to C&BP:

We found that Koch-controlled entities – including family foundations, organizations founded or run by Charles or David and key grantmaking vehicles for Koch groups – have contributed over $192 million since 1997 to 72 groups associated with climate denial and opposition to clean energy solutions to mitigate climate change.

Sad to say, but not surprisingly, there’s a strong Virginia connection here — specifically, our pals at George Mason University (GMU), the same folks who literally renamed their law school after far-right former Supreme Court Justice Antonin Scalia. With that in mind, perhaps we shouldn’t be particularly surprised that, as C&BP writes, “The top two recipients of Koch Family Foundation funding that have been associated with significant efforts to obstruct government promotion of clean energy activities are both affiliated with George Mason University in Arlington, Virginia.”

One recipient of dirty Koch dollars is something called the “Institute for Humane Studies,” described as “a haven for climate change deniers” and which “published a study in July 2014 arguing that the EPA’s proposed Clean Power Plan standards would increase electricity prices, eliminate nearly one million jobs and decrease the typical household’s disposable income by $2,100.” Also not surprisingly, that “‘independent study’ – complete horse manure, of course – was amplified by the U.S. Chamber of Commerce, Edison Electric institute and the Nuclear Energy Institute.”

Another member of the “Kochtopus” is our pals at the Mercatus Center, “a model for and a centerpiece of the Kochs’ free-market ‘Structure of Social Change’ approach to public policy, a three-part plan masterminded by [Koch executive Richard] Fink.” These guys, among other things, during the George W. Bush administration “submitted 44 suggestions to eliminate or modify federal standards for everything from energy efficient air conditions to renovations to electric utility plants” and also have “advocated for the total abolishment of energy subsidies and DOE Energy Efficiency and Renewable Energy programs.”

By the way, you’ll be happy to know that your tax dollars are helping to fund this as well. According to GMU’s proposed 2016-2017 BUDGET EXECUTIVE SUMMARY, “FY 2017 all-funds [Virginia] General Fund support of $218.7 million provides funding equal to approximately 22 percent of total university revenues.” Yep, your tax dollars at work — along with the friendly “Kochtopus.”

P.S. For more on the Mercatus Center, see Koch-Funded Mercatus Center Embarrasses GMU Yet Again with Laughable Report on “Freedom”, George Mason: Climate Denial U.?, Why the Koch Brothers Are Funding Colleges, Koch and George Mason University, Mercatus Center: Koch Industries Climate Denial Front Group, George Mason University becomes a favorite of Charles Koch, and of course SourceWatch’s entry on these guys, which notes that Mercatus is “an ‘associate’ member of the State Policy Network, a web of right-wing ‘think tanks’ in every state across the country.” Disturbing stuff, at state-funded