Former Trump delegate and Virginia Trump campaign co-chair John Fredericks has some pointed words about Trump’s new Communications Director, Anthony Scaramucci. This is classic.  One caveat: Fredericks is a huge fan, apparently, of both “Spicey” and Steve Bannon so that might help explain the following. Still, I agree that Scaramucci DOES appear to have a screw loose, that his tirade was disgusting/revolting/demented/etc, and that he should be fired immediately. With that…enjoy (?) former Virginia Trump campaign co-chair John Fredericks’ thoughts on scary-mooch (bolding added by me for emphasis).

Sean Spicer was right. This guy [Scaramucci] has got a screw loose. Wait until I read what went down yesterday. This Scaramucci guy, the language that he used in an interview is so uncouth, so disgusting, so revolting, so demented that I’m going to have to say blankety-blank through it as I read to you what this guy said, and this is a family show and it’s not really meant for this. I mean, this is the Communications Director of the leader of the free world. I am appalled by this guy’s statements. I want to puke. And why he didn’t get fired last night is beyond me. This guy should not report back to work on Monday…[Spicer] resigned over this guy because he said he was nuts…I’m not a fan of Priebus’…I can’t even read this on the air. I mean, who says this?…Who the hell does this?…This guy’s lack of experience is frightening…Now he’s accusing the Chief of Staff of committing a felony in an interview, on the record, of which Priebus had nothing to do with…I mean, you just gotta draw the line here. I mean, this is like inSANE what is going on…You have got to be kidding me…This is just sick…Who even talks this way? Do you know anybody that talks this way, let alone on the record, to a reporter…What the hell planet did this guy come from? What a jerk! This is the guy who’s the Communications Director for the leader of the free world and you want to know how screwed up this administration is?…I mean, what a crackpot…This guy’s crazy…Are we fighting over major policy issues. No! We’re fighting over little egos…who’s got a bigger this or that…who didn’t get invited to a dinner. This egomaniacal nonsense that is going on in the West Wing…There’s no excuse for this; you can’t spin it…He’s nuts!…This guy’s representing YOU, Mr. President, YOU! Not me, not the media – YOU! You’re responsible for this crackpot who you’ve got in as Communications Director. And you ain’t gonna get crap done until you get this straightened out… 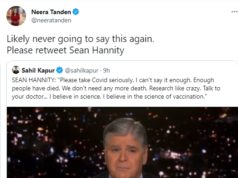