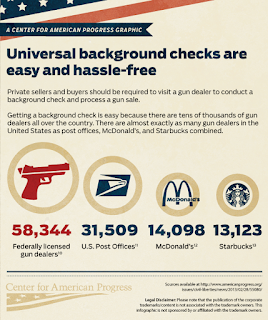 In 2016, the General Assembly enacted a legislation requiring the Virginia State Police to staff gun shows and be available to conduct voluntary background checks upon request by private, non-federally licensed gun sellers as part of a broader compromise on concealed weapon permits.  The law has been a total failure.

The legislation required the state to spend $300,000 to hire three new Virginia State Police employees to be present at all gun shows.  What have we got for our $300,000?

In January, The Daily Press reported that as of January 1, 2017, one person was denied a purchase at 41 gun shows after thirty nine checks.

This week, the Richmond Times Dispatch Reported that since that time, only 18 more checks were performed in the next six months ending June 30, 2017.  In other words, in 77 gun shows there were 59 voluntary background checks.  At 45 of 77 shows, no checks at all were requested. As of today, one buyer was denied.

During the same period of time, Virginia conducted 39,738 background checks by federally licensed gun dealers at gun shows that resulted in 325 denials.

The Richmond Times Dispatch obtained an estimate 15 to 20 private sales occur at each of these gun shows.  The RTD went on to note that if you assume the same rejection rate for private sales that than in sales by federally licensed buyers, you would have expected to see 9 to 13 additional rejections.

However, this fails to account for the fact that people who know they cannot legally purchase a gun from a federally licensed dealer are much more likely to opt for the private sale because they know there is no check.   The reality is that private sales probably have much higher potential rejection rates.

The bottom line is that if you cannot legally purchase a gun in Virginia it is still easy to get one – go to a private seller.

This is why we need to pass the legislation that I proposed last year (SB1439) requiring a check on every gun transfer in Virginia excluding family members, guns bequeathed at death, transfers required to prevent great bodily harm, or temporary transfers in the presence of the owner.  Polls repeatedly show that Virginians – including gun owners – support universal background checks by over 85%.

No one wants to prevent a law abiding mentally stable Virginian from purchasing a firearm, and we have had twelve months to see if the voluntary background check experiment would work.  It does not and it is now clear more than ever that mandatory background checks are the best solution to keeping guns out of the hands of criminals and the mentally ill.

It is an honor to serve as your state senator.  You can reach me at scott@scottsurovell.org if you have any feedback.

Video: “Really Emotional” Sen. Tim Kaine Says Shootings Like in Uvalde “Kind of Give Me PTSD,” Compounded by Lack of Action in US Senate ("It's like we have a gag rule about debating gun safety on the floor of this body," like "slavery during the 1830s") https://bluevirginia.us/2022/05/video-really-emotional-sen-tim-kaine-says-shootings-like-in-uvalde-kind-of-give-me-ptsd-compounded-by-lack-of-action-in-us-senate