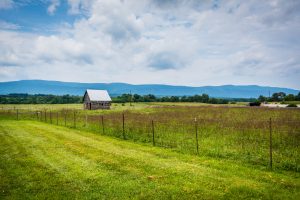 I know a lot of folks wonder very seriously about how we win our country back. It seems like, even in the age of Trump, with an administration in Washington that cares nothing for the Democratic traditions our country was founded on, we can’t get along, much less agree on a coherent message or strategy. And it’s clear we’re not going to win without both of those things.

At the risk of adding another “hot take” to the steaming pile of “hot takes” everyone has been inflicted with since last November, I can tell you- I know the answer. It’s why I’m running for office here in Virginia, in a deep red district, against a man who hasn’t been challenged in almost a decade. Who has a warchest almost unparalleled in the Commonwealth of Virginia. Who is close enough to the Trump family, here in the Trump Winery’s district, that he not only was atop the Trump campaign’s leadership team, he was okay with his name being used in association with the phrase “Trump values are Virginia values“.

But I’m taking him on- and I’m going to win.

D’you know how I know that? Because there is a progressive revolution brewing in Trump Country. And I intend to help power it, and take our country back. To restore the ideals that our nation was founded on. And to drive the toxic brand of politics that Trumpism represents back into the dark corners from where it came from.

The thing you gotta understand is that even in my district, a 54% Trump district, exactly how many people voted for Donald Trump as a giant middle finger to both the Republican and Democratic parties, combined with the number of people who didn’t vote for President, is huge. Yuuuuuge, even. And that sentiment hasn’t changed since November.

On primary day, though we didn’t have an opponent, I drove to every single polling place in our district, and made sure to talk to everyone- Republican, Democrat, and independent- that I could. In the 208 miles we covered, what blew me away is even at the official Republican Party booths that were set up, the volunteers manning them would openly malign the Republican party. The infamous “both sides are horrible, but we can’t vote for a Democrat.”

Why can’t they vote for a Democrat? They really couldn’t articulate that. Nancy Pelosi’s name came up more than once. One person, when I identified myself as a Democrat, said, “Oh! So you’re a baby killer?” But as I talked to even that guy, it turns out he didn’t want to make abortion illegal, and thought birth control should be free and over-the-counter; and was perplexed when I didn’t effectively espouse views better suited for The Onion.

So their idea of a Democrat is a Nancy Pelosi-clone who loves abortion. And year after year, nobody bothers to ever correct that misapprehension. Nobody bothers to stand up to the nonsense my opponent spews. D’you still wonder why they keep voting Republican?

We own a big part of that. The Democratic party looks at people like my opponent, and go, sure; he votes for transvaginal ultrasounds and “Day of Tears” bills. Sure, he was one of the architects of Operation Red Map with Ed Gillespie, and every single session of the General Assembly, tries to tweak the boundary lines of our district to his benefit. Sure, he thinks private prisons are worth funding and Medicaid expansion isn’t. And he’s got a direct connection with the Trump administration at the highest levels. But running against him would be really hard; why bother doing it?

Because even in the “reddest” parts of my district, people are yearning, are begging, for an unapologetic progressive who’ll fight for THEM. Who will stand up for THEM.

Don’t believe me? Let’s look at some combined polling of ALL voters from last November, courtesy of the PCCC:

The problem is, we haven’t been fighting for those values. We had a crop of corporate candidates, and the old breed of Blue Dogs, who were what I like to call “King Solomon Politicians”. You have two competing viewpoints? Well, just split ‘em right down the middle! There, problem solved! Hurray, I’m a centrist, everyone vote for me!

The problem is, nobody- and I mean nobody– likes that brand of pusillanimous dithering. It had the opposite effect, and rightly so. They want someone who stands up for THEM, unapologetically and without compromise. They want someone who will fight for policies that’ll actually make their lives better. That will help them provide for their families. Give them the stability to pursue and power their own success!

You want to talk about centrism? Let’s look at those numbers above. Progressivism is the new American center. D’you know all those “heartland” voters we keep trying to reach by espousing third wayist nonsense? The reason we can’t get it done is because middle America is located smack dab in the middle of the polling data above.

Like the mechanic I talked to. “What would you rather do?” I asked him. “Try and figure out what insurance policy to get your employees, or just focus on fixing cars?” He thought about it for a second, and then said, “Hmm. Hadn’t thought of it like that.”

Like the veteran in a sleeveless shirt and Confederate Flag hat, who nodded at me, and then said “I get my benefits through the VA, so I’m fine- but what about my kids and grandkids?”

Like the person who used to consider himself a proud and ardent Republican, but who now refuses to vote ever again for any politician who doesn’t support non-partisan gerrymandering unequivocally.

But we have to take advantage of that; this is a once in a lifetime opportunity, and we cannot let it go to waste. The consequences for failure are dire. The Democratic Party doesn’t have their feet under them yet from watching Donald Trump get elected to office. That’s neither an indictment of them, nor an excuse- it just is.

That means it’s going to take a grassroots effort from folks like everyone reading this article to bring about the change we need to see. To make a bold statement to not just the country, but the entire world, and show them the power we really have when we work together.

Our ability to strike a national message, as a tip of the spear to show the progressive revolution that’s gearing up, is nowhere clearer than in my district this fall. To have grassroots power behind an unapologetic progressive take down a personal friend of the Trump family, in the Trump Winery district, will be a five-hundred decibel wakeup call for progressives across the nation, so they will follow suit in state and federal races in 2018. To excite and move people to power our movement forward, and to take the toxic brand of politics that Trumpism represents and nuke it from orbit.

We can do this- together. Because the forces arrayed against us are robust and menacing, but they are nowhere near as powerful as all of us working together. That’s how my campaign has been built- ten, twenty, twenty-seven dollars at a time. An avalanche of small donors working together to send this people-powered progressive campaign to Richmond, and show everyone across the country that it can and WILL be done in every state across this great nation.

Donate. Volunteer. Get the word out, not just about my campaign, but others. Working together, we can accomplish anything we set our minds to- and by God, our country is worth fighting for. It always has been. It always will be.

Kellen Squire is an emergency department nurse running for the Virginia House of Delegates in the 58th District this fall. Donate, volunteer, or get the word out about our people-powered campaign today.