h/t to 2017 Virginia Democratic House of Delegates (former) candidate Sarah Smith, who shared the image below and tweeted that Rep. Dave Brat (R-VA07) “defended Richard Spencer and refused to denounce him before 8/12 #Cville hate rally citing 1st amdmt.” Smith added (bolding added by me for emphasis):

While Richard Spencer does have a 1st amendment right to say white supremacist bull, that doesn’t mean we accept it and stay quiet. News flash @DaveBratVA7th you can *gasp* say you are disgusted by Richard Spencer without stopping him from exercising his rights. The most striking aspect of this letter is this paragraph here. It reads: Richard Spencer is the President and Director of the National Policy Institute. The National Policy Institute is an “independent organization dedicated to the heritage, identity, and future of people of European descent in the United States and around the world.” Instead of denouncing Richard Spencer, Dave Brat legitimized him and glossed over what those words actually mean. What does it mean to be, “dedicated to the heritage, identity, and future of people of European descent?” Hmmm. Oh I know. That’s code for “white genocide.” AKA white supremacy with a brush cut and hair gel. AKA the alt-right. Dave Brat isn’t stupid. His staff members aren’t stupid. They know this. They won’t denounce it because they’re afraid to lose votes. Join the women #InBratsGrill & retweet. Why is @DaveBratVA7th willing to defend the alt-right, but not the people of color he represents? 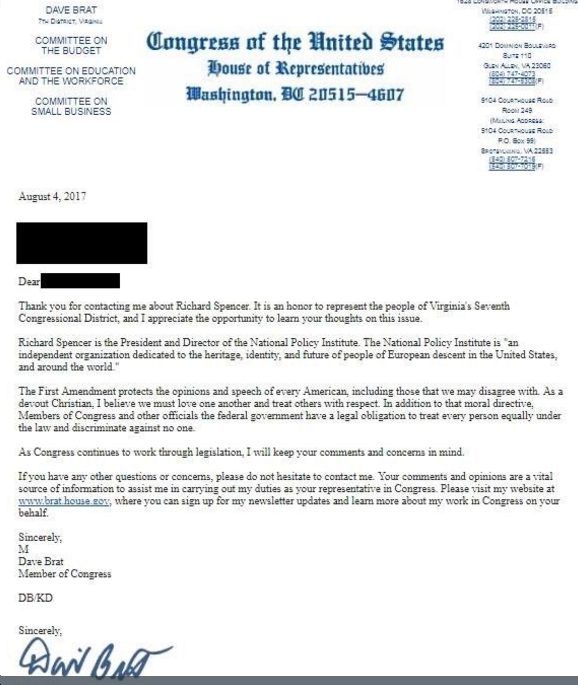