Tweets like this one by the Virginia GOP really show what’s at the rotten core of that party at this point — a total eclipse of the soul, heart, mind, you name it. In sum, religious Roman Catholic Tom Perriello rightfully calls out white pastors/priests if they don’t preach against against white supremacy, and the Virginia GOP responds by calling Tom a “Christian-hating bigot. Of course, consider that the Virginia GOP is led by a guy who’s infamous for telling an anti-Semitic “joke” at a Ken Kookinelli rally, so what else would you expect from these guys? Also, these are the same folks who nominated raving bigot EW Jackson – for Lt. Governor of Virginia, no less! – in 2013. And finally, I’d point out that for decades, certainly since the 1968 Richard Nixon campaign, the GOP is the party that’s employed the so-called “Southern strategy,” the goal of which was “to increase political support among white voters in the South by appealing to racism against African Americans.”  What more is there to say about this party, other than it has a “black hole sun” for a soul? 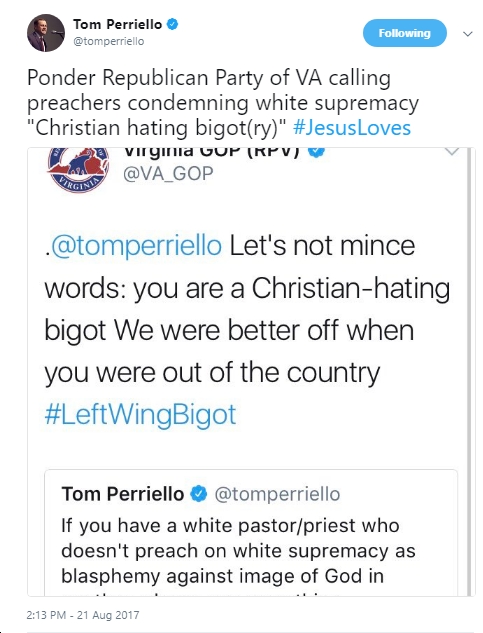 As a Christian minister, I applaud @tomperriello for calling out evangelical leaders who put Trump before God. @va_gop, your Tweet is sad.