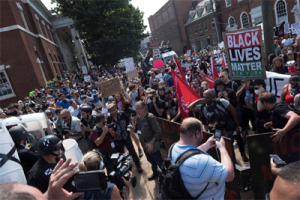 Over the past couple of days, I’ve seen Democrats from multiple places on the spectrum blaming each other for the terrorists in Charlottesville.

Before I say anything else, remember: Above all, the atrocity of this weekend is the fault of those who perpetrated it.

We can also lay blame at the feet of those who lead these bigoted cowards. That means people like Donald Trump, Corey Stewart, Richard Spenser, and David Duke. They are also to blame as they not only fail to condemn the actions of their flocks, but actively encourage their actions through dog whistles and outright orders.

We can also blame people who voted for Trump, because everyone knows that his campaign’s opening message was one that painted Mexicans as rapists, drug dealers, and murderers. It painted the first black president as other. Between that and his endorsement by the KKK, there was no secret in the kind of people who supported Trump, so to act surprised now would be dishonest.

But for Hillary supporters to universally blame Bernie supporters, and vice versa, is proof that too many people would rather “be right” than actually fight hatred.

There are people who voted for Bernie and then voted for Trump. They make up a remote fraction of Bernie progressives, and should not be used as a means to place blame on the entirety of people who supported (or continue to support) him. Again, the ones who actually voted for Trump do share blame in this, but not every single Bernie supporter. Nor is Bernie Sanders himself to blame.

Conversely, Hillary and her supporters are not responsible for this either. I have never met anyone who voted for Hillary in the primaries and then voted for Trump in the General Election, nor have I heard that happening at all. That said, the DNC was caught red-handed favoring one candidate over the other. That weakened the trust between wings in the party, but is still not solely responsible for Donald Trump’s election nor the racist rally in Charlottesville.

To fracture now and play the blame game on our side of the fence is to prove that you learned nothing from last year. It also proves that you’re unwittingly aiding Gillespie, Vogel, and all of the GOP candidates this year. It proves that you’re more willing to spend your time attacking each other rather than attacking literal Nazis and their enablers.

I’m not saying we all need to ignore grievances and act like friends. Progessive Democrats have the right to push our candidates to be better, and should not be constantly accused of helping the Republicans through that pushing; not everyone who is vocal about wanting Northam to take a better stance on the pipelines is committing to voting for Gillespie. Nor is that a commitment to not voting at all.

On the same token, folks who were pro-Northam from the beginning are not admitting to being okay with people being bought and paid for by Dominion. Nor are they saying that they’re perfectly okay with corruption in our politics. They have other progressive issues that they’re more passionate about; that doesn’t mean they should be dismissed.

In short, stop blaming each other and creating strawmen just prove your side is right. You’te angry – I get that more than most – but you’re channeling it in the wrong direction. All of us are adults and should acknowledge that nuance exists.

Here’s my suggestion – find common ground on the fact that you hate Nazism, and that we need to make sure Ed and his band of regressives don’t get anywhere near Richmond. Let’s vow to each other to help ensure we make big gains in the House of Delegates this year.

But let’s also vow to see each other eye-to-eye on things. That means those who were pro-Northam from the beginning shouldn’t just walk away and act like victory in November is the end of our work. The corruption represented by the pipelines is something that must be worked on, and the progressives who have made it one of their key issues need your help. Conversely, dismissing someone as not a true progressive simply because they don’t view money in politics as their number one issue is not helpful.

When everything is said and done, and we win elections, we cannot and should not go back to our silos. That’s how we got here in the first place; we need to break that cycle and come together.

In the words of Rev. Barber, “We must have a steadfast togetherness so that our movement does not have movement fatigue.”

Dare to be better. Dare to have steadfast togetherness.

This reverend made a passionate call for Americans to come tog…